It *did* happen today at the pool: 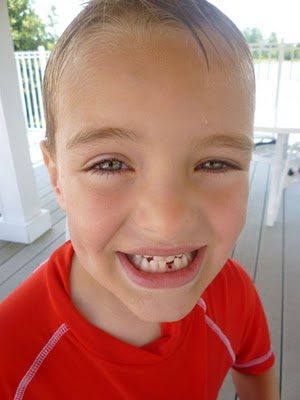 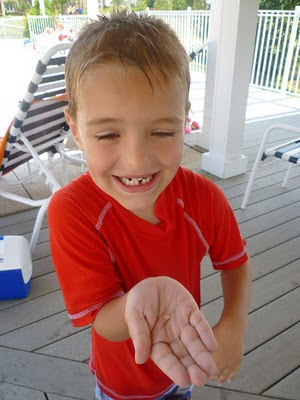 Mrs. Kelly pulled it right out! I even videoed it, (since I brought the camera to film his first swimming, anyway.) :-P Will was/is SO PROUD!

So I get to play the role of the Tooth Fairy for the first time tonight!

The going rate: I've heard horror stories of parents fumbling with bills in the dark & accidentally putting a $20 bill down instead of a $1. Someone even said they'd heard of a tooth fairy bringing a DS! Are you kidding me?!?! (And thank God Will never got wind of that!) I think I ended up getting a dollar in the end, but I don't remember at what I started out. (50¢?) Well, no inflation here! We have lucked out: our tooth fairy is sweetly only expected to bring a quarter!!! She may do a bit more since it's the first one, and she's going to sprinkle some fairy dust (blue glitter) in her wake. ;-)

(Why give more than is asked for? Plus, it's easier to increase the payout with age than dial it back!)

Will was so excited talking about how he thinks she is going to find the house (ours) with the tooth in it, wave her magic wand to get in, tip toe over to his bedside table (where it's lying on a napkin, so it doesn't get lost under the bed covers - his thought; I'm grateful!) to get it, leave the money, and then wave her wand, again, to fly off. He said she's going to take it & give it to God, and then God will take it and make it grow back bigger in his head, and that will be his adult tooth. (He KNOWS God is the One who makes everything happen, so I love how he found a way to weave Him into the plot on his own!!!)

I didn't realize he was even old enough for this business, until a couple months ago when it became *the* topic of discussion at school. I have never been a "boo hoo, my baby is growing up!" mommy. I have LOVED each milestone & birthday... But this last year is the first year I have ever wanted to freeze them a little from growing up, and Will's new toothless grin is the first constant reminder of growing up that has kind of gotten to me. The kicker? Will showed me tonight that the tooth beside the empty space is starting to wiggle. *Glup*
Labels: all about us God kids