I felt awfully heavy today. There's no news, just really feeling the frustration JB & I have. I KNOW change is coming. That is a fact. When, where, & how, though are totally up in the air. His hours at work are getting worse & worse, and I feel us slipping back into bad Michigan times. Yesterday, Will sighed out of the blue, "Why does Daddy have to go in early now, too???" (Him being home for breakfast has been the saving grace that makes him not coming home until 10 PM every night OK for the kids.) I know this won't last, b/c I know God will deliver us from this situation. We are NOT going around that same mountain, again. But I can't seem to shake the weight of the stress today. I want to want to revel - it's Mardi Gras, people! Laissez les bon temps rouler! (Und froher Faschingsdienstag, Deutschland!)

After school, the kids and I mailed out the KidsLink Downrage card kits my MOPS group put together for children of deployed soldiers. Today was the first day you could mail them in, so I've just been holding them since we finished last month. Ours are going to military children at Fort Riley, Kansas.

I don't know what's gotten into Annelise, but she is off the wall today. She won't.stop.talking. (Which is saying a lot coming from ME! :-P) She serenaded everyone in line at the post office singing to herself, (although it was a song about loving mommy, so that actually rocked,) and I don't think she's taken more than a couple breaths since she got home from school. I was so ecstatic to pick up Will, so he could talk to her!

After the post office, the kids wanted a treat, and I was looking for something to amp up the festivity of the day, so we went to Whole Paycheck* and bought a King Cake! 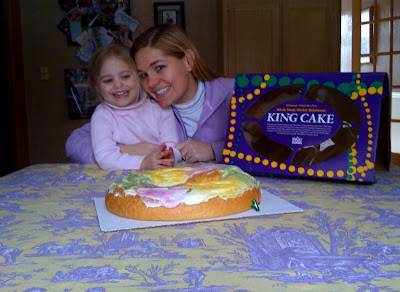 King Cakes are a Mardi Gras tradition. They have a cinnamon roll-like filling on the inside with icing colored with traditional Mardi Gras-colored sugars on the outside. (Think elaborate, filled coffee cake.) The purple represents the passion of Christ (or justice), green represents hope (faith) and gold the rewards of leading a Christian life (power). There's a little plastic baby figurine that's usually baked inside (ours was just set in the box, though - boo!) and if you get the piece with the baby, you get good luck & have to buy the next King Cake. (The baby is to remind us of the Christ child.)

People up north here are all about pączki (pronounced "POONCH-kee") on Shrove Tuesday. They're traditional Polish doughnuts filled with jelly or creme. Pączki are good, too, but I'd rather have King Cake. (I am super particular about my doughnut-esque pastries. Krispy Kreme or NOTHING. I won't even eat at Dunkin' Donuts. :-P)

*Whole Paycheck = Whole Foods ;-) My friends couldn't believe we were moving only 1 mile away from a Whole Foods last year, but I only go there like once every 4 months. It's SO expensive! I am all about Trader Joe's!!! (Which is LESS than a mile away! I am so going to miss that one day...) But I remembered being in WF this week last year & they had delicious King Cakes - a fact I just could not forget today. :-P
Labels: celebrations food Germany kids MOPS stuff I recommend