While the biggest part of our family life is focused on football & cheer these days, I'll attempt to round out the current snapshot of our lives here with "everything else." ;-)

* I loooooooooooove almost everything pumpkin-flavored in the fall! (Except, no: I don't drink Starbucks Pumpkin Spice Lattes. I don't drink coffee - only tea! Mmmmmm, chai...) My beloved Trader Joe's has the BEST pumpkin-themed food selection on EARTH, and my ABSOLUTE fave this year are Ginger Pumpkin Mini Mouthfuls: 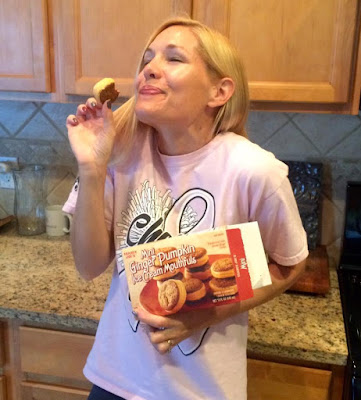 * OK, so this *IS* a little bit cheer: my Cheer Committee ladies have truly become my BFFs here, and the best part? Our husbands all enjoy hanging out together, too! (Y'all *know* that can be a social hurdle!) Here we are at one of the husbands' bday party: 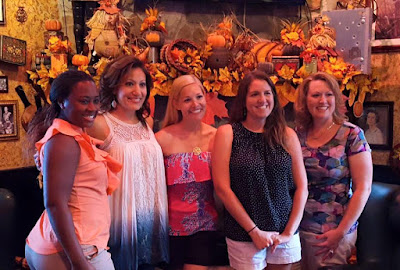 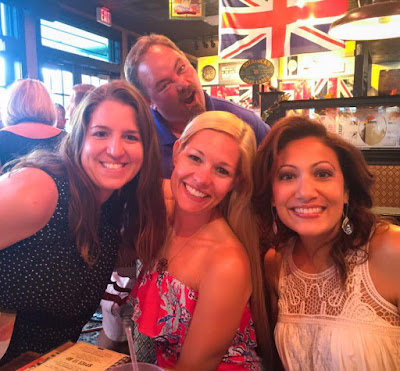 * The kids went to one of our cheerleaders' 80's-themed bday party at the skating rink! Ah, memories... ;-) 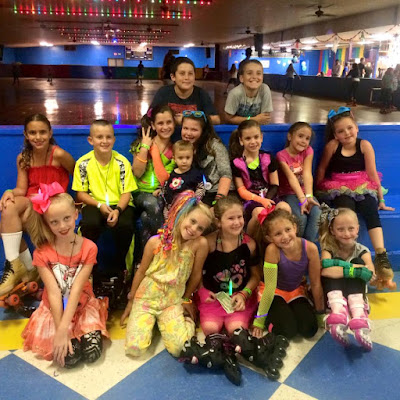 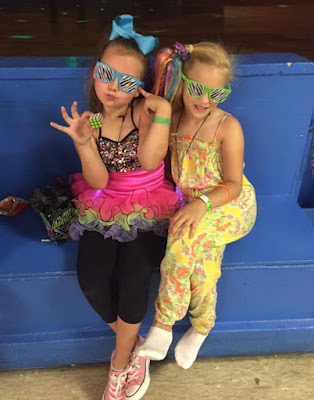 * Annelise found out she got a big speaking part in her 4th Grade Musical next month!

* HUGE PRAISE REPORT: my gym friend, who beat stage 4 cancer last year, had it come back suddenly & unexpectedly in her BRAIN four months ago. She found out after she felt dizzy in my Zumba class, walked out, (I didn't know - I thought she had gone to the bathroom or just had to leave early,) and then had a seizure, which it turns out was caused by her brain tumor! (I didn't find out until waaaaay later.) Where's the praise? She was BACK at Zumba last Wednesday with totally clear scans!!! THANK YOU, GOD!!!

* Annelise & I got our flu shots at Target, no problem. However, the next day when we went to get Will's...we had to leave after making the pharmacist sit there while he SCREAMED FOR 30 MINUTES -- with NO FLU SHOT! (He's *always* been like this; but he got his at Target last year - not "fun" but not this!!!) I was livid & mortified... I tried everything kind, benevolent, & finally strict, and I can't even hold him down, anymore - he's too big. I know this sounds stupid, but we were both so traumatized... I had JB take him several days later...AND HE DIDN'T PITCH A FIT AT ALL. :-O Guess who has a new job FOREVER? Congrats, Honey!!! Blood work coming up in a couple weeks, and at least I'm off the hook now! :-P

* I was called for my VERY FIRST jury duty last week! I couldn't decide if I was excitedly proud to execute my civic privilege...or if it was a boring chore. :-P We were supposed to have five cases, and none of them made it to jury trial! 2 pled guilty, 1 settled, & 2 defendants didn't show, so they now have arrest warrants! The judge was so entertaining & informative while we waited on the last case to decide if they wanted to go to trial - he answered all sorts of questions about speeding tickets & other legal fun facts. It was actually fascinating! And I even beat the kids home from school, (although JB was here. ;-))

* Will had his first choir concert! Dedicated post coming...
Labels: all about us food football friends God kids stuff I recommend Zumba