I hadn’t publicly picked a personal word for 2018, but I feel led to say (with trepidation - fear of not living up to it with extreme excellence...) that I think my 2018 word is “give”. (I don’t do this every year, just when I feel like God makes it clear. The one other word I got clearly a few years ago was “present”, esp. putting my phone down when I’m not alone.)

So, give. I’m not a stuff-giver. I *AM* a giver of smiles, joy, & attention, but not of material things, and sometimes God calls us to give those to people, too. “Stuff” does not loom as largely on my radar as it used to. Not that I don’t still enjoy receiving gifts! But “stuff” used to be way more important to me than it is now. Over the last five years especially, my heart has been pulled further away from material things towards experiences. That’s been fantastic for me; however, it doesn’t negate that material gifts can be a primary love language for others. So I feel like I’m supposed to up my generosity game this year...

I doubt I’ll blog much about it - I don’t want to sound like I’m bragging for doing anything beyond being a kind human! Just a couple initial examples: my friend who lost everything in the Harvey flooding commented the other day about how she no longer has a lighted makeup mirror. I didn’t think much about this, b/c makeup is so low on my priority totem pole. Seriously, y’all - this is MY makeup mirror: 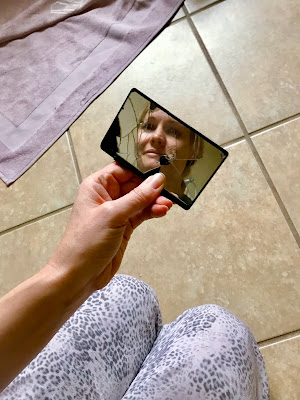 Half of a broken compact from a Sephora free sample several years ago!!! :-D But all I need to see is one eye for a bit of eyeliner, and I can, so why buy something else? :-P

My friend, however? Makeup is very important to her. It is a big part of her life; it gives her comfort, confidence, and normalcy. I saw an awesome lighted makeup mirror at Aldi, and God immediately put her on my heart. It’s things like THAT that I want to follow through on this year.

One more: a faithful member of my Zumba class for years at the fancy corporate gym in the city is trying my new PiYo class (more on that soon - PiYo replacing Zumba there) and she was asking about shoes vs bare feet. (It’s your choice: I do it in bare feet, but if you want support, you can certainly do it in shoes.) I told her about these cheap yoga socks that I had bought on Amazon that have extra grip on the soles. She got excited at the sound of that and said she would look into those. My pack from Amazon had five pairs in it. I will never use more than one at a time, and maybe two a week. I have one of the pairs, still sealed up in its original packaging, in my bag to give to her next class.
Labels: all about us friends God stuff I recommend Zumba