Annelise's all star cheer tryout was AWESOME!!! I was extremely pleased: it was so low key & positive. They stretched, warmed up jumps, then tumbling passes. They went into the back gym away from parents for the real deal in scheduled groups of about 7 at a time, but Annelise came out beaming. She put together running front walkover, roundoff, back handspring; and then back walkover back handspring. They did let her try out to fly, and with one adult male coach basing her, she flew in her heel stretch & said she "almost" got her hands back to scorpion, but not quite. She was so excited! I was most impressed with how no-pressure they made the atmosphere; everyone was so happy, relaxed, & joking around - such a good vibe! She had to pose on the way out: 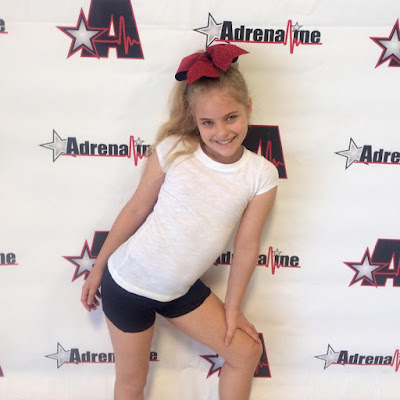 (That hair bow was a tryout gift from our sweet family of friends who helped us settle on this gym - they left it as a surprise on our door the day before. How sweet is THAT?!?! Their daughter will be a freshman in high school this year, and their son is actually on Will's 7on7 football team.)

They announced placements in practice groups several days later - the precursor to setting the official teams for the whole year. They have a pretty solid idea of who needs to be where, but for one month (until the 2nd week of May) they'll have the flexibility of potentially moving people around to form the strongest teams. I'm ecstatic with Annelise's placement!!! She has passion, strong stability flying, & a level two back handspring...but her jumps are so low, (I'm an awful jumper, too, so I don't push it much in our rec squad! :-P) she can't do a scorpion, (required level two flying skill) and she's never done choreo this fast before. I wasn't sure where they would stick her...but she's in a level one/two practice group, and get this: it's by far the smallest in the gym (yay, more focus!!!) AND (the BEST part!) this would be a Junior (14 & under) team, instead of Youth (11 & under)!!! She works so well with older kids, and maybe if she's one of the smaller ones, she'll get a chance to fly? We'll see! No matter what, she's excited, and she honestly doesn't seem to care what position they put her in...which is extra confirmation that we're doing the right thing! ;-) :-)
Labels: all about us cheer friends hair bows kids