We celebrated Annelise's 10th birthday this weekend with a Project Runway: Birthday Edition party! It was FABULOUS!

Initially, we couldn't decide what kind of party to have: she wanted to invite too many friends (20-30) to have a sleepover or a party somewhere they charge per child with a hard count up to 20, (like skating.) I wanted the flexibility of not stressing over exact RSVPs, (why has RSVPing become so laissez-faire?) so we wanted to come up with an idea we could do on our own at the little park pavilion by our neighborhood where we've been having Will's bday parties. I totally admit, I have a bit of an inferiority complex with party planning: hospitality is not my natural gift. I wanted it to be something fun, special, & creative - not boring or the same old, same old. I had seen this story about a 4 year old who makes paper dresses with her mom and thought that if a 4 year old can do it, surely 10 year olds can! :-D It would honor Annelise's love of fashion design, without being as expensive, skilled, or unforgiving as using fabric would, and we could theme it after one of her favorite shows! (Her favorite not on Food Network. :-P ;-))

It was so easy to prep, (key for me!!!) For the backdrop & runway, I bought a 40"x100' roll of plastic tablecloth, ($9 with 40% off coupon ;-)) which we duct taped to the pavilion roof, unrolled down, secured, and then rolled out the length of the pavilion floor. We also used more of the same roll to cover our four picnic tables. We have a friend with a printing company who printed two high-quality outdoor banners for us! (This guy: I told him just the black & white logo on plain paper; that I only needed him to do it, b/c my home printer just does 12" & I was hoping for 36" across...and he came back with these, which Annelise can keep forever! What a prince!) We had her friends sign the colorful one after the party: 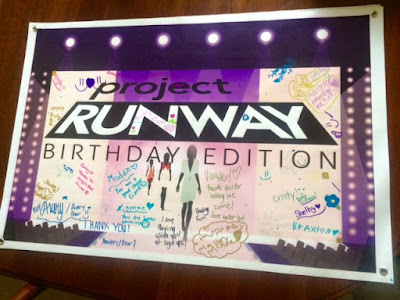 And we used the sleek black & white one as the runway backdrop logo.

For the outfit-making materials, I bought a plain 24"x100' roll of white all-purpose easel paper, thinking that could be the base material (a la muslin) for everyone. (Even if we had 30 girls show up, that could be 3' each = plenty.) We already had huge gorgeous rolls of trendy red & white chevron and green & white Moroccan trellis print wrapping paper from Christmas, along with giant spools of wired ribbon from old MOPS craft projects, tons of old gift bows, and an enormous supply of Mardi Gras beads I would be THRILLED to use up!!! :-D We already had 6 pairs of scissors, so I didn't buy any extra of those, either; the only additional décor I bought was a roll of metallic purple wrapping paper to round out the color schemes and two rolls of clear packing tape - one for each pair of tables to share to tape the creations into place.

We set up the pavilion, turned on my Block Rocker for music...and just as people arrived, the rain began to pour! (The weather had said just a 20% chance of sprinkles! I was horrified - my #1 fear re: outdoor parties coming true!) The deluge *did* last the ENTIRE party, fully until we packed up to go home...but quite thankfully, the rain never blew sideways into the pavilion, and no one was grumpy or had a bad attitude about it! (Maybe it even helped the girls stay focused on their creations? :-D)

They were so creative! Some of the moms had stayed (to avoid going back out in the rain :-P) & helped. I wish I had better pics!!! I MCed the runway show with my Block Rocker mic while my friend took pics with my phone, but the girls moved SO FAST, and many wouldn't slow down to pose! (Who are these people?! :-D ;-)) The dampness in the air and the fact that some girls made their dresses super duck-waddle tight was a recipe for them not staying on long after the runway, (which breaks my heart! Y'all KNOW how psycho I am about pics, & I can't believe I don't have just one of everyone posing in their fashions!!!) But the main point was served: everyone had an absolute BALL and said it was the coolest bday ever!

Best of what we could catch on the runway: 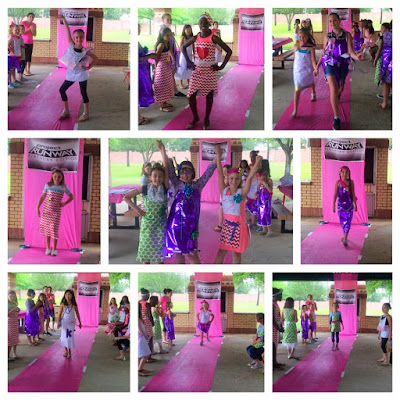 A collage from a mom friend: 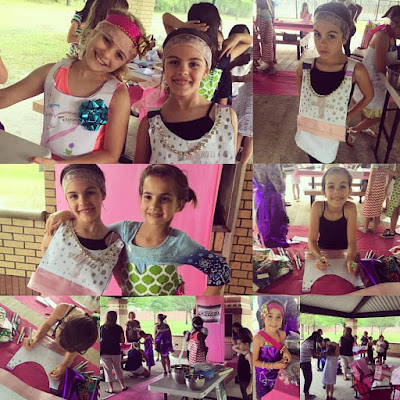 And finally, everyone and CAKE: 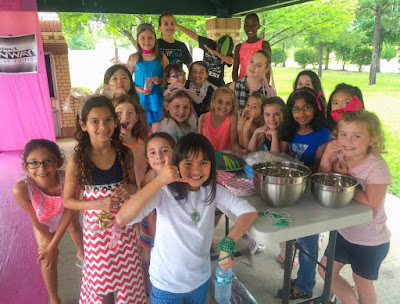 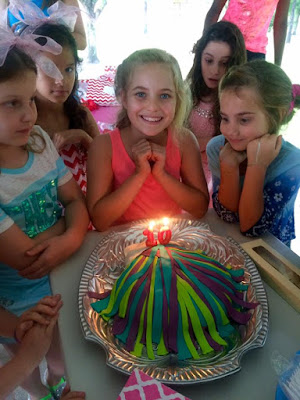 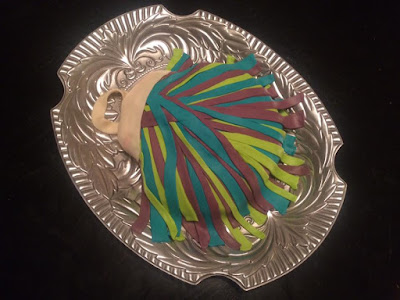 (I made another fondant pom cake. :-))
Labels: all about us celebrations food friends kids MOPS stuff I recommend