Sooo, we had lightning enter the wires into our house on Sunday & literally EXPLODE in front of our eyes! WE ARE FINE, but it was one of the freakiest experiences of my life. JB & Annelise were on a daddy/daughter movie lunch date, so just Will, Bailey beagle, & I were home on the couch. (We purposely stayed with her b/c of the big storm line coming through = she’s terrified of thunder.) When it hit, it sounded like a gunshot in our faces, and we literally saw a FIRE bomb burst at Will’s feet. He was *not* actually hit - he felt a little shocked & his feet tingled, but no burns whatsoever. Nothing burned or smelled like burning anywhere in the house. Our DirecTV, modem, router, one laptop, my bedroom TV, & myriad of odd outlets in random places throughout the house are fried. We *think* the lightning entered through the wires of Will’s phone charging cord, which is extra long & was draped from the plug bar over the couch, ending about where his feet were = approximately where the fire bomb exploded. By God’s grace & literally an inch, he’s 100% fine! *I* was a bit dazed later in the afternoon after the adrenaline faded, and poor Bay was beyond traumatized - literally the worst creature it could’ve happened in front of! :’( But now we’re working on getting everything fixed & saying extra prayers of thanks for protection! I got this radar history snap of about when it happened... 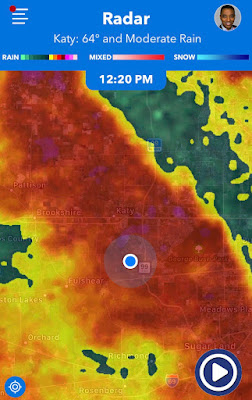 I told Will he should be thankful we did our CPR certifications. :-O :-P He was less freaked than I was initially - he just had no concept of how bad it could have been, & he obviously doesn’t have parental perspective... but he *did* get a little quiet & down before bed Sunday night. Lots of loving reassurance...or as much as a teen boy will accept! :-P

Yes, even after this, I love storms! I don’t ever want anyone to be hurt or anything get damaged, but aside from that, storms are still my *MOST FAVORITE*!!! The storm kept raging for another 45 minutes after our blast, and we weren’t flinchy at all. We spent the whole time from 10 seconds afterwards until JB & Annelise got home trying to decipher what actually had happened. I don’t think I’ll be truly freaked until the next time there’s a strike right in the yard.

The two most common reactions from our friends: 1) thank God Will wasn’t holding his phone & it wasn’t plugged in. 2) Talk about a clear confirmation from God that it really is time for y’all to move! :-D #amen #amen

Bailey had an extremely eventful 24 hours: late Saturday night, (the night before the strike,) she was barking her head off outside - enough that I knew something was out there. When I went out in the dark, I was surprised to see that she was actively dancing around something in the grass (not barking at something on the other side of the fence, like I assumed.) I *knew* what it had to be - and Will is deathly terrified - so I calmly asked JB to come outside & help me get her, (b/c someone needed to shine a phone flashlight: I wasn’t going to get close enough to grab Bay, if I couldn’t see what species it was & its position related to her.) It wasn’t venomous, but it’s literally the VERY FIRST snake we’ve actually seen in our yard in almost 7 years!!! She was so brave! :-D (Just like storms, I’m not afraid of snakes, either. (Spiders & bugs? Eeek eeek eeek! No way!!!))
Labels: all about us God kids