We embraced my sweet gym friend's advice and really enjoyed our Spring Break week at home with no big trips, but something special each day along with all of my "normal" stuff. :-)

After teaching Zumba on Wednesday (best class energy in ages! really a stand-out morning!) the kids read their books they picked out this week while I got cleaned up. (The hot tub was supposed to be closed for cleaning, but it was done, so I could get in! Joyous!!!) And yes, I made my kids read this week. :-P Annelise read her next Magic Tree House, and I am SO EXCITED for Will!!! We *finally* may have found a series he & I can both agree on. (He wants cartoons & nasty Captain Underpants. Barf. I want something that...has ANY other redeeming value. :-D) Tim Green's Football Genius series may be our new saving grace. It's at his reading level (he's on the young end; recommended ages 10-14), it's about youth football, and it's written by a former Atlanta Falcons NFL football player = Will's ultimate team. There are six books total, so hopefully the remaining five can keep him engaged & inspired when it comes to reading. *fingers crossed* 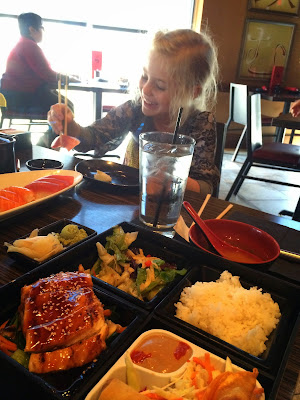 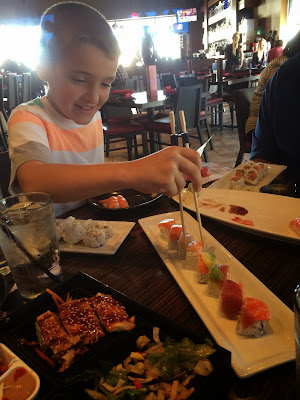 On Thursday morning, Annelise came to my adult Yin yoga class and practiced beautifully!!! She was so quiet, respectful, & did every pose as guided. Both the instructor & I were so proud!!! ♥ (Will played ball in the kids center.) We then got to see a BFF's brand new home & celebrate their house-warming with a fun panini lunch. :-) I definitely got a few house ideas for our turn next year, as well - my friend has SUCH a great design aesthetic! Thursday afternoon, JB brought me Sbux chai ♥ and we all went together as a family to football practice out in the fresh air & sunshine. We topped off the day with a fresh crawfish dinner (barbeque for me ;-)) with football BFFs - are you as bowled over by this gorgeous evening as I was? 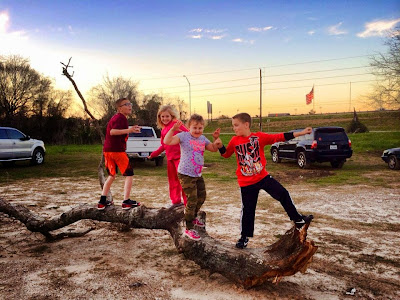 Friday began normally: my barbell strength class and a few errands. Friday afternoon, however, we babysat for our same football friends going to the rodeo. Four kids for a sleepover = I managed the food, JB managed the Xbox. It was...loud. :-P

Saturday, we were supposed to run a booth at the local Children's Fest from 11-6 for our youth football league, but it was canceled for rain, so we suddenly had a whole day open up for us! After unbeatable lunch specials at Thai Cottage, we split up: boys to a movie, and Annelise & I to American Girl! We got her poor Caroline's hair fixed at the doll salon - stunningly worth it!!! That hair was so insanely matted; the stylist took 20 minutes to mist it with water and brush out each section before styling. (Annelise chose an updo with a crown. Of course. ;-)) 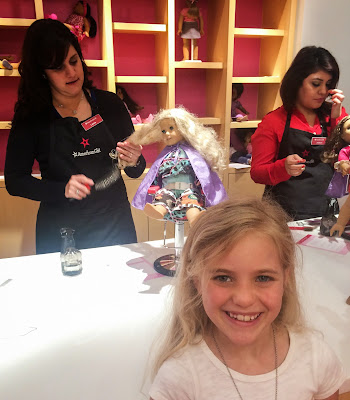 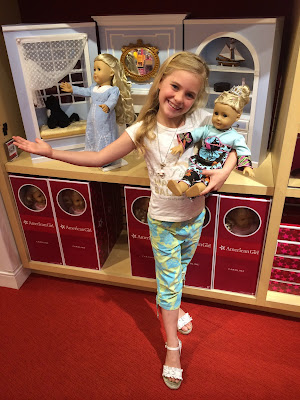 She was also thrilled to score Meatloaf, the bulldog on sale! (She loves collecting the American Girl dogs, and I think she now has them all, except for Toasty, the Collie, who's retired.) Super thanks to Grandma & Grandpa for the Christmas gift card that she used part of for our precious girl time with NO whiny boy interruptions! ;-) :-D

We still had an hour before the boys' movie ended, so we just extended our girly browsing time through the mall. I know that sounds like "such a typical girl thing", but honestly, I can't tell you when we really did it last. We lounged at Sbux together for a few minutes, and then we used another gift card at Justice. [Justice is NOT my favorite store, but Annelise had a $10 card, and she's been longing for a Justice water bottle with an "A" on it to take to school since September; so that was her choice. (Nevermind that I have a Silhouette and can monogram or put whatever name, initial, design, etc. in whatever color on whatever bottle we have. Oh, no. It had to be the insane rainbow leopard & zebra print Justice one. Hello, tweens. :-P)] I have to say, though, I was excited to teach her the best way to shop: browse to see what you like, and then buy when you have gift cards! :-D (Even Sbux was free, b/c I had my gold star credit. ;-))

When we reunited with the boys, they had sprouted facial hair: 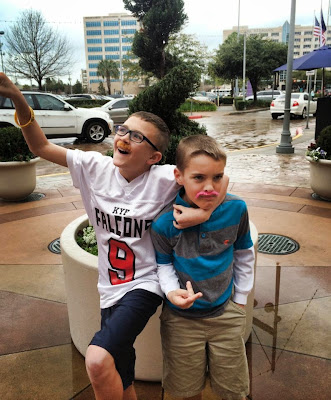 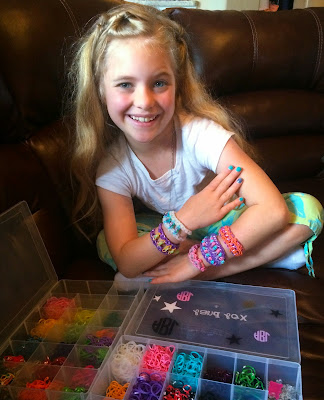 She's wearing two Paper Lanterns on one arm, and a Dazzle, Moxie, and Taffy Twist on the other.

For a "not doing anything big" Spring Break, we surely had an awesome one!!! :-)
Labels: all about us books celebrations food football friends kids stuff I recommend