Annelise has been fascinated with really learning to sew for years. She first did hand sewing in Montessori preschool and Kindergarten; when one of her older BFFs in North Carolina got a sewing machine & made her a purse, she was sold! She's been asking for lessons, but I didn't want to do that until she had a machine, (and we didn't pursue that last fall, b/c we didn't have time to add another activity August-December.) When this year's American Girl of the Year came out as a long-blonde-haired, blue-eyed dancer who learns how to sew and design her own clothes & dance costumes, that was *IT*!!! :-D The learn-to-sew talk ramped up to a whole nother level. :-P

So happy birthday, Pookita! Grandma & Grandpa gifted her with the *real* (not kiddie) sewing machine of her dreams! ♥

Ummm, yeah - did I mention I know *nothing* about sewing? ;-) Not how to thread a machine, not how to wind a bobbin or where it even goes! :-D

But give me some forethought credit: I wouldn't voluntarily sabotage myself with frustration. ;-) One of *my* BFFs here is a very competent seamstress (she made the girls' poodle skirts!) and she said she'd be happy to teach us both! YAAAAAY, FRIENDS!!!

We took Annelise's machine over to her house for our first lesson after school Thursday (while the boys were at football.) She taught us (& actually her own daughter for the very 1st time, as well :-)) how to thread the top, how to wind a bobbin, where to put it, and how to thread that bottom part. She drew a bunch of straight lines on some old scrap fabric, and Annelise practiced sewing over the lines, as straight as possible. 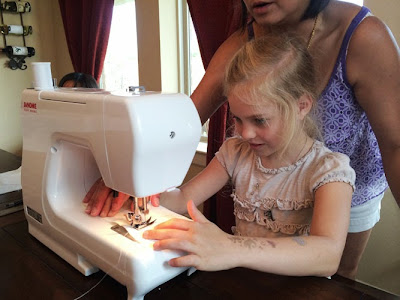 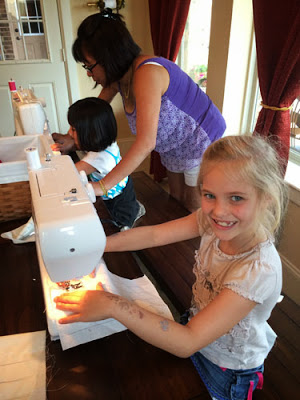 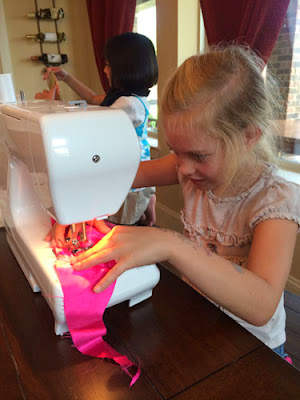 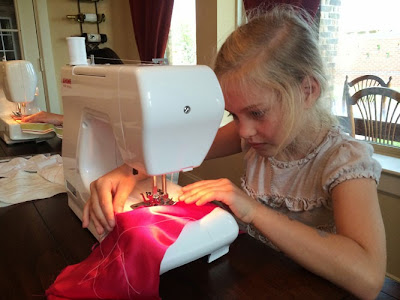 I have to say, I was really impressed! I tried one or two, and she's naturally better than I am! :-D At the end, my friend drew some curvy lines to sew over, and whoa!!! Those were SO DIFFICULT to trace. We definitely need a LOT of practice! Annelise is SOOOOO excited about the practice part, though. :-) We're keeping her machine out on our dining room table, so she can practice whenever she asks. For our next lesson (probably in another week or so) my friend said we'd try to *make* something simple! Oooo & ahhh! :-D
Labels: all about us friends kids