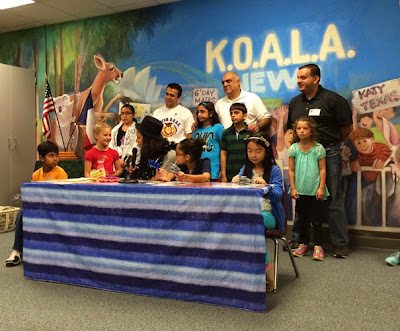 Omigosh, y'all - if any of my schools would have had a morning announcements TV show, I would have bent over backwards to be on there as often as possible!!! :-D

Annelise had her 2nd grade field trip Friday to an InterActive Theatre production of The Jungle Books in Houston. (I didn't get picked to chaperone - so many parents wanted to, they had to choose by lottery. :-/) But afterwards, all parents were invited to meet the buses at a giant park for lunch, so yay! Park selfie: 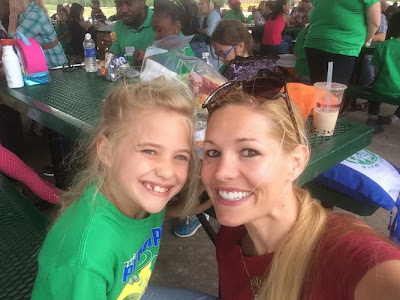 Friday night was SPECTACULAR for our 7-on-7 spring passing league football team! How awesome is this pre-game huddle? ♥ 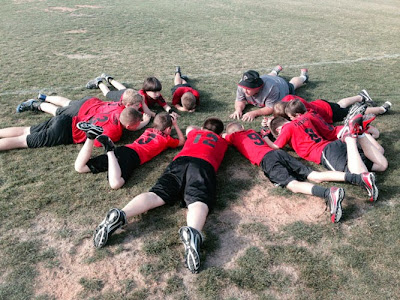 We won our first game against another 4th grade team handily, and we ALMOST beat a 5th grade team in our second game!!! :-O We scored first, led at halftime...and boy, was their coach freaking out!!! :-D He was SO frustrated that his older boys were being beaten, he literally had a tantrum! We were so proud of our boys for not getting frustrated when the other team got dirty & extra aggressive. (This is *not* tackle - there are no pads or helmets; that's only in the fall. This is supposed to be passing, catching, and stopping your opponent with a light one-handed touch.) We only lost by ONE POINT in the last minute of the game! [They made their extra point on their last TD after we had not. :'(] It still felt like a win. We are so proud of the character & heart our team displayed, (on top of some awesome defense!!! ;-)) I can't believe next week is already the very last of this season...
Labels: all about us bubble tea football friends kids