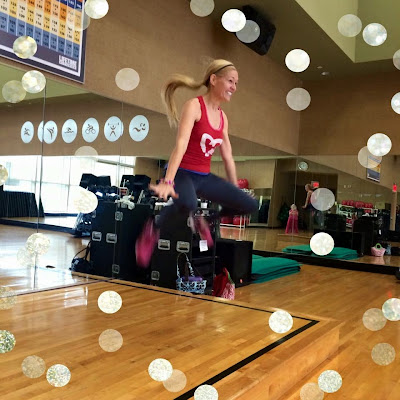 I'm not a big goal-maker. I actually feel very anxious about making New Year's resolutions or proclamations any time of year, for that matter, about what I want to achieve...precisely b/c I am such a perfectionist control freak. If I put it out there, I pressure myself to accomplish it faster than originally stated, and if - by some horror - I didn't attain a goal, I would be crushed & mortified, (b/c why would I announce it as an actual goal, if its success were optional? :-P) Most of my best personal growth comes instead via quietly "let's see how this goes for now..." I gave up all soda (I used to *NEVER* be without a can of diet Coke!!!) 2 1/2 years ago (*omigosh*!!! didn't realize it had been so long!!!) by deciding one day at a restaurant, "I'm going to order water instead, and see if I can be ok with that." Then I decided not to buy any more coke at the store; maybe I would just have it out, if I needed it. But I kept choosing water. & I didn't have another coke after that. Had I made a public proclamation that "This day, I will quit Coke!" all I would've done was crave it. :-P It's just me.

My personal psychoanalysis aside ;-), I do enjoy an excuse to make amendments, press reset on habits & routines, (esp. when that reset isn't forced by moving to a new state :-P) and find new challenges. In 2015, I'm running to take over our entire youth football league cheer program; the election is at the very end of January. This would be huge. HUGE...

I've also been asked to lead a Life University class through our church! I used to run my MOPS group when the kids were babies-preschoolers, but this will be the very first Bible study I've ever led. We'll be using Pete Wilson's Let Hope In, and I'll also be choosing a couple songs each week for a worship element - I'm going to use Then Sings My Soul as that resource.

Casually on my radar for 2015: recipes. I see recipes that "I'd like to try" all the time. I file them away (in a folder I rarely open) ...and usually never think of them, again. I want to actually try a few, instead of deciding "not to bother putting the $ & work in when probably no one but me will eat it." :-P (But not often, b/c it probably *will* be just me eating ALLLLL of it.)

Clothes. I lost a lot of weight 2012-2013, and despite a winter flux (I fully believe my body packs on extra fat in the winter, b/c I am sooo cold all the time; it's literally a biological survival mechanism) I have maintained the loss...which means my closet is full of clothes that are up to 8 or 10 sizes too big now. And b/c I always hoped to get back down after having kids, I also have new old clothes I can actually wear, again. :-D I would like to be a little more ruthless in there with items to give away.

OH!!! And I would LOOOVE to *finally* figure out what to do about making a t-shirt blanket out of all my special college & beyond tees that I don't ever want to wear, but would never give away. (It can't be all squares, though, b/c some shirts just have a pocket logo I want preserved; some, long rectangles across the chest; others have huge designs; my shirt pieces will all be different sizes, so the typical squares do not fit my vision. I want more this. This. This?)

Good luck in your 2015 endeavors, big & small, and keep me posted!!!
Labels: all about us cheer food football God stuff I recommend Zumba