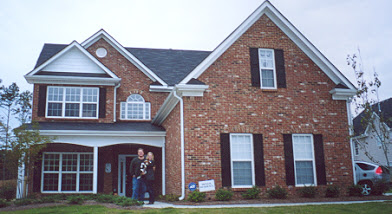 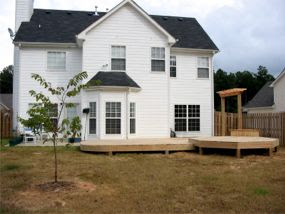 This Old House is the reason I got to become a dance teacher. [It's about the 5th house in off a backroad; when you turn right out of the neighborhood, there's a small church that also houses The Studio School of the Arts. (You could even kind of see it from our yard, which is really why we went nuts planting leyland cyprus. ;-)) I took a chance calling to see if they needed an assistant for dance almost ten years ago...and did they EVER polish my skills up right!]

This Old House is where both of our children were made, incubated, and where we brought Will home from the hospital. His (& our first) nursery. We painted it Thoughtful Spot blue & sponged white clouds on the ceiling. JB & I also built our own built-in shelving system around his huge window. (Geeze, we were handy... We've been renting b/c of our quick moves so long now, all those home enhancements seem a world away!) The staircase in This Old House taught Will to climb.

This Old House has even given me one of my best Houston friends! (Our old next-door neighbor there moved to Birmingham, AL after we left, and she met Donna. Both Donna & I announced on FB we were moving here to the same neighborhood in TX at the same time, so my old neighbor connected us. :-))

I lived in This Old House longer than I lived in any other house, except the one I grew up in in my hometown. This Old House would still be perfect for our family today, with the addition of a pantry - its only flaw. ;-)

The day we moved away in 2006, with Will only 18 months old and me 8 months pg with Annelise, was one of the worst in my entire life.
The one other time we came back for a dance studio friend's wedding (Will was ring bearer :-)) & drove by This Old House, I bawled hysterically. It cut my heart to shreds.

My BFF, Jackie, has moved back to ATL. We became BFFs when I lived in This Old House & she lived just up the backroad. We joined Junior League together, both got pg with our first children within two months of each other, learned how to mother together, and generally did life together. It broke my heart that she moved back to Georgia literally two days after we moved away this summer; but it helps now that I can see the bigger picture: I never dreamed we'd love Texas as much as we do. I'm finally in a place where I no longer mourn or long for This Old House & the life we led there. It felt so good to have Jackie drive us by on our visit with her Wednesday and me finally be able to smile at it, instead of weep.
Labels: all about us dance friends kids moving