We held our youth football league's Opening Ceremonies last Saturday, the 15th. It was a HUGE undertaking: we did uniform distribution all that morning, had a big tailgating party in the gigantic stadium parking lot with food trucks, inflatables, live bands, etc., and then we held the actual ceremony and first game at 6 PM.

My Cheer Committee was up past midnight the night before, sorting & packing our cheer unis...but I can't lie: we loved every second of our hang out time! :-D 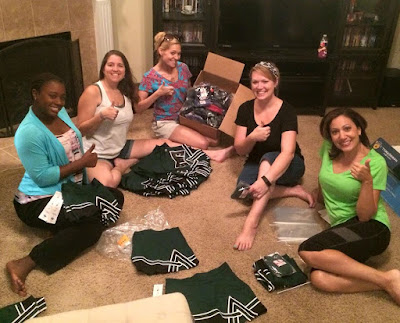 After distribution, I had to get all 34 cheer squads with over 300 girls lined up in order by division to enter the stadium. (The term "herding cats" comes to mind... ;-)) To be honest, it was actually a lot smoother than I feared! I even got to pop over for a pic with my squad in the line up, before getting back to my VP duties: 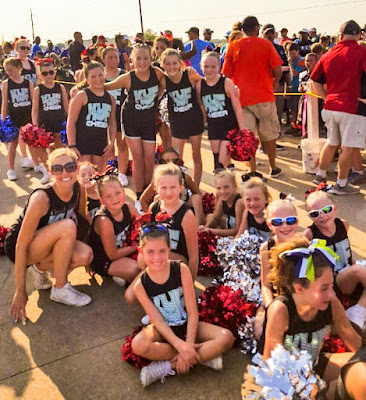 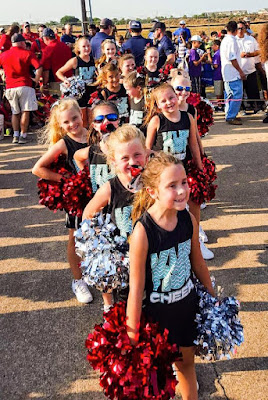 It's hard to tell from this pic, but all 300+ girls & 60 coaches entered across the far sideline before spreading across the field for our Hello Cheer and our Opening Ceremonies Dance that we taught everyone at Cheer Camp: 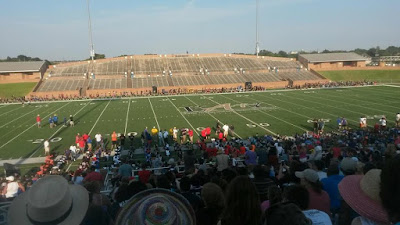 I *sooo* wish I had footage of the performances - a few parents posted grainy close-up videos of just the sliver of the field their squad was on, but I haven't seen where ANYONE got the massive presence of the full field! :'( I need an official cheer photo/videographer!!!!! But to get a tiny idea of how many people were there, this is one section, as we waited for our league-wide aerial photo: 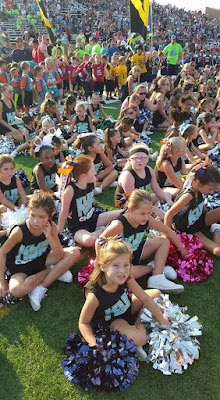 It was a HUGE success, and I ended the night teaching a new squad that had to cheer the opening game a bunch of new cheers and making friends with their coaches. :-D (The Board wanted our team to play, & JB said NO!!! He wants them to EARN playing on that field for the Turf Bowl in November... ;-))
Labels: all about us celebrations cheer football friends kids stuff I recommend