Krispy Kremes are the BEST doughnuts on earth. Hands down. Not up for debate. I love their plain original glazed; in general, I do not like cake doughnuts. (Up north, people go nuts for apple cider & spice cake doughnuts each fall; you'd think I'd like that, but they're just not my jam.) So when KK announced they were making their *original glazed* with *pumpkin spice* for ONE DAY ONLY in October, I was SO EXCITED to try... and then I was crushed that it was also Annelise's Eureka science program day at school, and I wouldn't have time to go. Fast forward to last week: due to the tremendous reception, KK decided to do it one day in November, too!!! 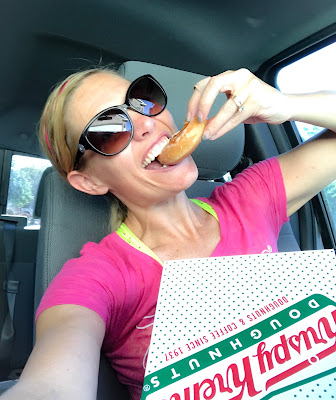 I went after Zumba!!! And they sooo lived up to the hype!!! Krispy Kreme FOREVAH!!! #ogpumpkinspice

On a completely different, also incredibly satisfying note: last Friday, the kids & I volunteered with Feed the Hunger, packing thousands of meals that will be sent to hungry people in Haiti, as well as in rural Appalachia here in America. I won't lie: Will was not super excited to go, at first... but I think he ended up having more fun than any of us! :-D It was so satisfying to do so much good for so many people so quickly. We packed 116 boxes at 240 meals each = 27,840 meals for children in just our session! It was a record-breaking total overall: 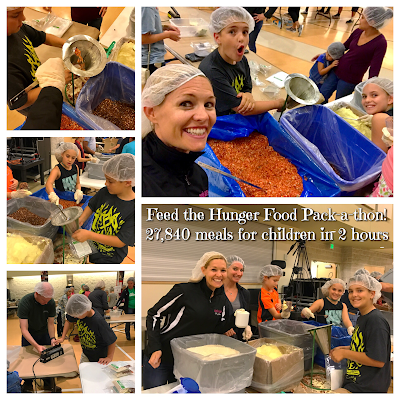 It was the perfect way for God to help us prepare for Thanksgiving...
Labels: all about us food God kids stuff I recommend