Annelise had her 8th birthday party this past Saturday morning, the 26th. Here's my philosophy on choosing Chuck E Cheese as the venue: no, I do *not* love it there. :-P But 1) the kids do.
2) It's the only place I know that will let you bring in your own cake & drinks WITHOUT having to reserve & buy one of their party packages. (I resent paying for soda, overpriced paper products, & cheap "extras" that I do NOT want).
3) It's out of my house, so no clean up before or after.
4) It's indoors, so I don't have to stress over any threat of storms.
5) We're not limited to a certain number of guests (like 10 or 20 in a party package) so I don't have to stress over RSVPs, and siblings can be welcome instead of counting toward a coveted slot.
6) We only pay for tokens there (I buy paper plates, napkins, & balloons at the dollar store and juice pouches at Costco) so we have more money to budget for more tokens = longer playing = more fun = better party.
7) I don't have to bother with goodie bags (that ⅓ of guests forget to take, anyway) b/c we put that $ toward more tokens = more tickets = they choose their own take-home goodies!
8) 10 AM on a Saturday morning = you have virtually the entire place to yourselves! (And there are plenty of booths for parents to chill & chat in while their kids run amok in relatively close proximity. I've been to 3 kid parties lately with no real place for parents who weren't dropping off to socialize.)
9) We NEVER go there, except for parties, so it's still "special" (unlike home, gymnastics, the pool, etc.)
[All that said, this may have been our last CEC party; Will has outgrown it. (He's certainly not "too old" to use a million tokens at his sister's party! :-P But he feels too old to have his own party there. ;-))]

Annelise wore her new Elsa dress! Boy, was this sucker an ordeal!!! :-D The slightly more formal official Disney Store dress-up version has been sold out for MONTHS. Literally. It's going for $400 on Amazon & eBay! :-O (No. Stinking. Way.) The killer irony in all this is that we were actually *AT DISNEY* when all the Frozen stuff came out!!! We touched ALLLLL of it...and just walked away; we hadn't seen the movie, yet, & Annelise had *never* begged for specific Disney merchandise after seeing a film before. (Yes, I'm kicking myself for not buying a few $50 dresses I could now be selling for "a steal at $200!" :-D Ah, 20/20 hindsight... ;-)) I looked for weeks, just for luck = nothing. I couldn't believe this *ONE* time she actually had fallen in love & specifically asked for something that should be reasonable, it was totally unavailable. My mom looked, too; she even called Walt Disney World to talk to vendors in the parks. Zilch. (That's where she found out that the Bibbidi Bobbidi Boutique is getting all the Elsa dresses first; if there are any left, they go to stores in the parks, & they can only be picked up in person - not shipped, like I got Annelise's only-sold-in-the-park Expedition Everest jacket for Christmas the week after we were there.) Last Thursday (yes, less than 48 hrs before the party) my mom tried her Disney Store one last time. Of course, they didn't have the formal dress, but they were *just* unloading these - which aren't even on the Disney Store site! They're actually less expensive, softer (made like a satin nightgown instead of with itchy costume material,) & look more like Elsa's real dress (a straight skirt, not poofy.) My mom overnighted it, Annelise opened it on her real bday Friday, & was over the moon to wear it Saturday to her party! A (should've-been-simple-but-tragically-caught-up-in-mass-marketing-hysteria ;-)) wish fulfilled!!!

I love the party pics I took with my phone. I love that so many capture their joy in the moment instead of all being posed. :-) And everyone LOOOVED the pom pom cake I made! (Dedicated post coming, b/c this one is already too long! :-D) A FANTASTIC party!!! 100% stress-&-fuss-free for me, tons of her friends, & everyone was happy! What more could you ask for? 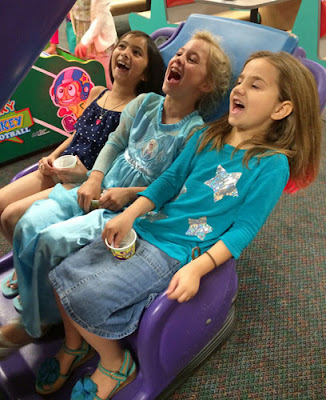 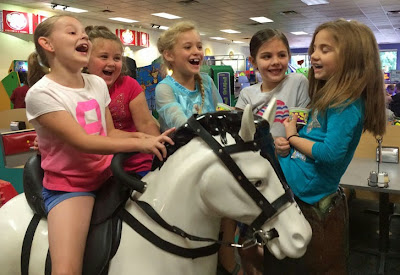 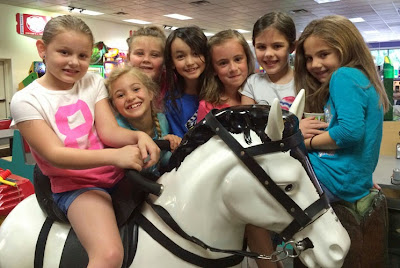 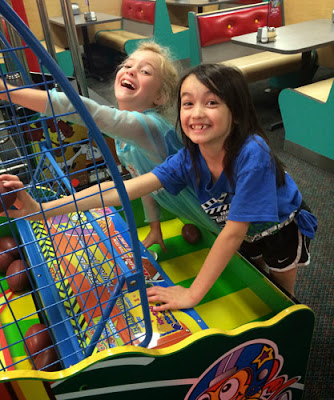 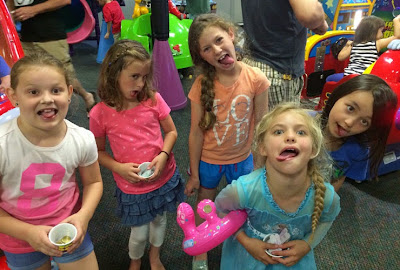 This pic doesn't do the dress justice. The sheer attached cape is gorgeous, glittery, & flowy! 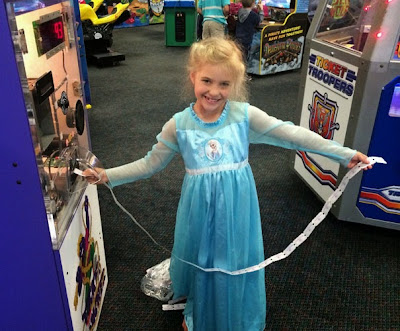 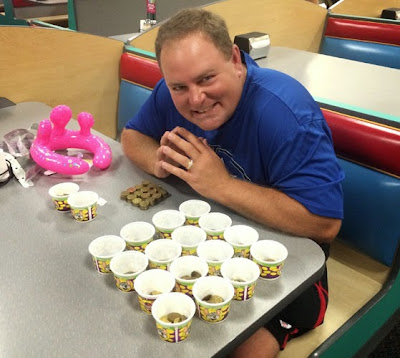 Check out the Elsa hair! Her new daily do: 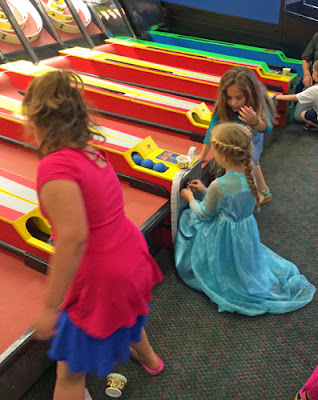 Boring group shot that's only included to serve as the before shot... 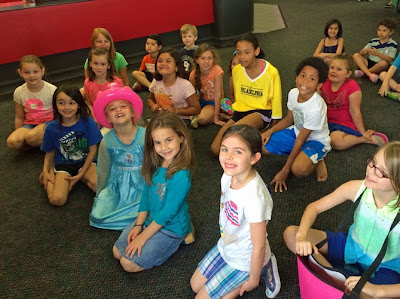 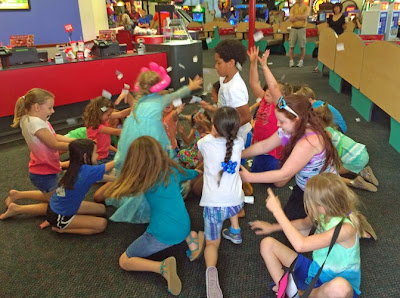 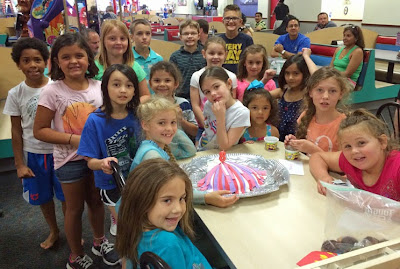 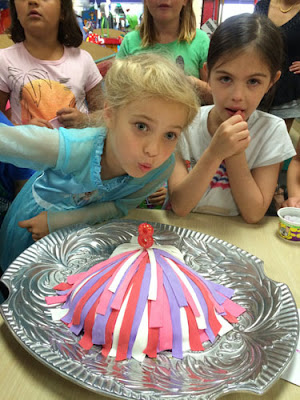 Labels: all about us celebrations friends kids movies stuff I recommend