Last week was such an emotional rollercoaster. On top of these things my heart ached over, *ANOTHER* friend's mom passed away suddenly, (her cancer had unexpectedly come back,) and two friends-of-friends lost their children. Heavy stuff. Those things definitely made my disappointment over my gym schedule seem small...but they didn't erase it. It was an extra sting. I'm still working on refocusing my attitude. There was a chance at one point last week that I'd get my Mondays back...but it fell through, so for whatever reason, God must really want me in this weird, back-to-back W/Th routine. I know He can bless it... It will be better... And if not, He will move...

A sweet member wanted to take a pic together after class last week! That always makes my heart sparkle! 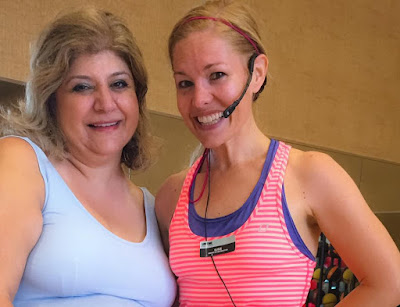 I had Will's curriculum night ("Meet the Teacher" sounds too juvenile for junior high :-P) Tuesday. I'm still really pleased and impressed in general. All of his classes are very technology-integrated. Here's an explanation from Will's preAP science teacher. There's just so much more creativity & freedom now than when I was in school! They don't have textbooks. NO MORE TEXTBOOKS! Because smartly enough, it's too expensive to constantly update them, when they can instead utilize online versions. The expectations are higher across the board - Choir is no easy A. Will has several required choral contests he must compete in for a grade outside of school!

He had his first junior high football scrimmage on Wednesday vs. the neighboring junior high...where a bunch of his former youth league teammates, whom JB coached, now play. That was...weird. Bittersweet. I miss them! They've been our football family for years, and we don't really know anyone on our current team. Will started at free safety on defense and took a few reps at wide receiver on offense: 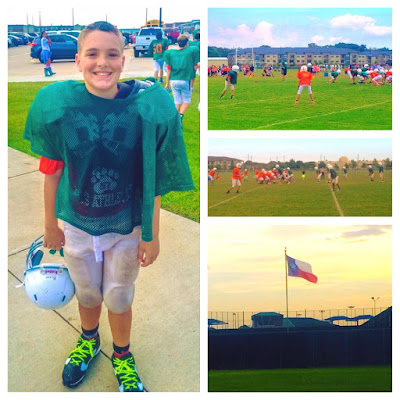 (He looks SOOOOO CUTE, but it was not a fine afternoon of football. :-P We were not good. Prayers for growth & progress! :-D)

On Friday, I *had* to work out my rough feelings. So I did. My reset-strength-productivity trifecta: yin yoga to restore, barbell to tone & strengthen, and then I've started doing this simple Precor machine (Adaptive Motion Trainer - like a cross b/t an elliptical & stair stepper) that I can do while I check my email, handle cheer business, respond to texts, & do FB all on my phone, b/c I don't have to hold on while I stride. It feels SO PRODUCTIVE to do that stuff I would do anyway, instead of doing it on the couch! Who would've guessed FB would help me work out more?! :-P

That made me feel better - not only to feel stronger & more productive, but to use my yin yoga time really praying and seeking God for peace about EVERYTHING, big & small. A dedicated hour seeking His clarity.

Speaking of better, OMIGOSH: I felt *SO MUCH BETTER* about youth cheer this weekend!!! There were tons of things different about this weekend compared to that first one that felt kind of off, but I don't think any of those were the reason for the difference in me. I think God just truly adjusted my focus! :-) We cheered along with the other Dream Team squad (coached by my Cheertator BFF) so that was very different, but it was great: we had 30 cheerleaders on our one sideline!!! 30!!! It could have been a chaotic mess, but I kept everyone together & on task, sharing cheers and keeping positive attitudes. I've also instituted weekly spirit awards, so the girls are excited about that. I've never done them before, b/c when you have 15-20 girls, you can't truly watch what everyone's doing the whole time, and I don't believe in token spirit awards, where everyone gets one by the end of the season, whether they deserved it or not. I don't think the girls could've handled that as littles, but now that they're older, they can understand: if you set your poms down when they're supposed to be up, if you sit down while we're all standing hands on hips, if you leave for a break, don't come back quickly, & miss a set of cheers = you will NOT win the spirit award. At this point, they're just excited at the prospect of getting a sparkly hot pink glitter mini spirit stick! :-P 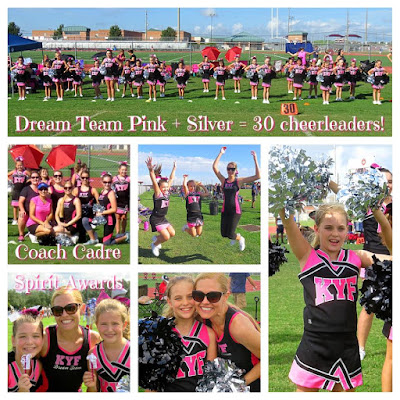 Our dance was also along with the other Dream Team, but b/c there were so many girls, they could only get half in the video! So this is my half :-D and just imagine the exact mirror-image happening to the right. ;-)