So, Junior High football has been...different. There are 30 kids on Will's team, instead of (often under) 20 the last 4 years = with only 11 players on the field, he's getting less action than he's used to. It's weird for us, b/c we no longer have ANY insider info on the team: we're no longer the coaching staff, we have no idea who's putting in solid effort, who's making dumb mistakes, who needs work on this or that, b/c it's no longer JB's job to coach. This new detachment is dramatic...and honestly hard for me. Y'all know I like to be in the know, and now we're "just" plain parents. :-/ Not my style. :-P

But also, nothing I can change! :-D So, I try my best to cheer and take pics from a million miles away up in the stands (ugh!!! soooo missing our amazing sideline family photogs we had the last few youth seasons!!!) The team is at least doing well! 3-1 after this last week's win: 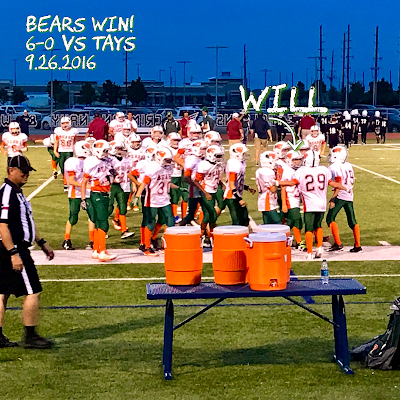 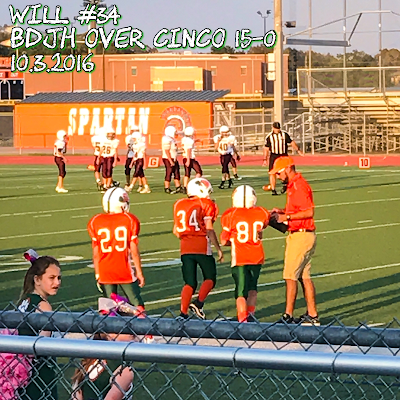 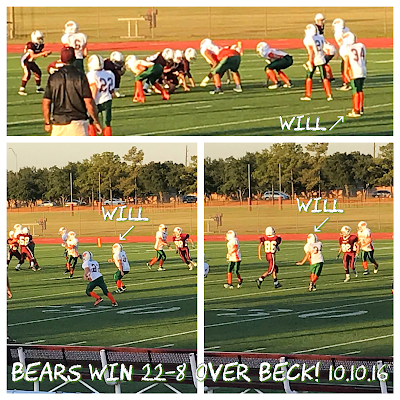 Here's a little highlight (they're almost impossible to capture!) from this Monday's game. Will is #34 in white on defense on this side of the field, lined up closest to the 2nd down marker:


There are only two games left!!! I can't believe how fast this season goes by. :'(

This Tuesday, he had part of a Fall Choir Concert. (Part, b/c the main concert is this coming Monday. During his football game. No, he will not be skipping football for choir. There are more choir events than there are football games, Grandma & Grandpa Blake are flying in to see him play in this game, and even though I never dreamed I'd have my child choose a sport activity over an arts activity, I am ALL ABOUT the football choice. Especially since he sang one of the two songs they're singing on Monday this past Tuesday. (Yes, they're only doing 2 songs Monday; another reason I'm ok missing that for a whole football game.) Choir has been...less charming than last year. There's a new teacher (the beloved one from last year is still around, but the new lady is doing Will's class. Yeah...) I don't know that his Tenor Bass Choir sounds as amazing as I expected, but hey - it's early! Here's their performance (Will = middle row, right end) of One More River:

(You can see two 8th grade football players made it from their game just in time; 8th grade plays on Tuesdays. This week's opponent is only 2 miles away; next week's is half an hour! Another reason Will can't swing both, like these two did.)

After the concert, I indulged Will with cheesy breadsticks :-D and we went to pick up Annelise from cheer: 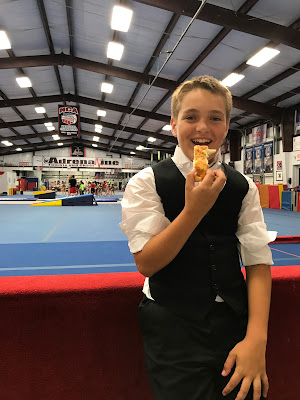 "Why, of course - I dress like this all the time!" ;-)
Labels: all about us football kids music stuff I recommend