Sissy's birthday party yesterday was wonderful! The Party Pets animals were a HUGE hit - Annelise kept leaning over during the presentation and saying, "This is the BEST party of my LIFE!" :-) I promise to post more party pics later this week, but I can't scrap it until I get a few that Wendy & Christa took.

For now: THE CAKE! I've had so many people ask about it, I figured it deserved its own post. :-P

We made a butter almond bundt cake and then stacked it on two springform pan batches of brownies, so the whole cake would be taller for the Ariel doll to stand in the middle. (It needs to rise up to her waistline, so you don't have to put several inches of icing on top to make her dress flow naturally.) We put FROG jam (Fig, Raspberry, Orange, Ginger) as filling in between each layer. I cannot tell you how good that touch of tart fruitiness was in b/t the brownies! 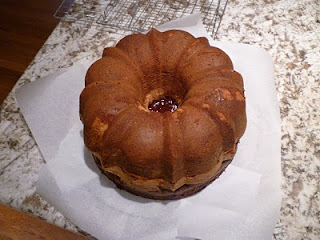 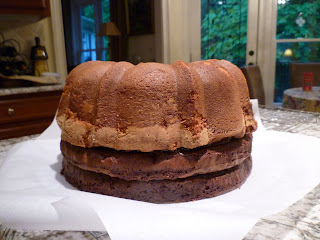 I made homemade buttercream icing and colored it purple to match Ariel's dress. After the cake was covered, I stuck the Ariel doll right down the middle and filled in the bundt hole with the remaining icing. We added a few metallic dragées to finish her off: 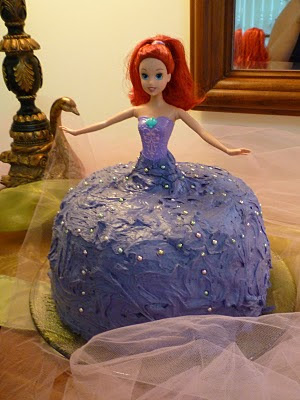 Annelise was most pleased! 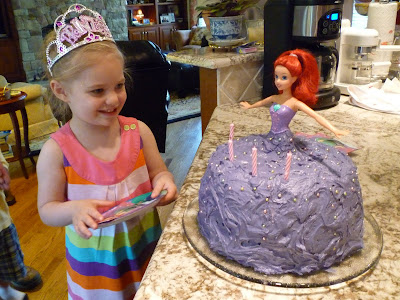 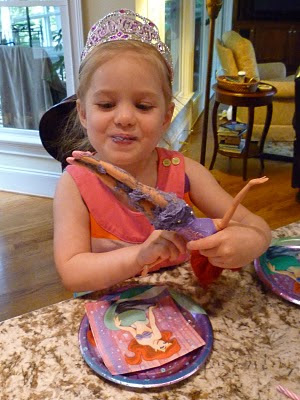 My mom came up with the brownie idea, and I think she deserves recognition from the James Beard Foundation for it. Although I loooove chocolate, I'm not big on chocolate cake, and this solves everything! (I like fudgey chocolate, not cakey.) I can't imagine ever thinking a plain, single-flavor cake without a brownie layer is satisfying enough ever again!!! 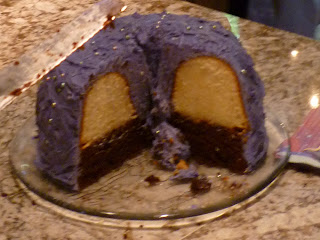