To say I've had the best and worst 4th of July weekend ever would be an understatement. Saturday morning was dreamy!!! We woke up and went to the 4th of July parade in our new downtown - so well done! I can't help but get teary every single time the veterans march by, and I get all cheerleader-jumpy when I hear a drumline. ;-) The revolutionary-era fife & drum corps was A.MAZ.ING!!! 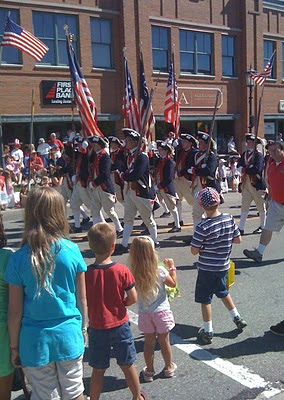 And of course, Will & Annelise got several POUNDS of candy. I exaggerate not. I just cannot get over how much candy they throw out (& WHY! Isn't the grand spectacle of the parade enough?!) up here at every single parade. It's easily as much (although almost all Dum-Dums & Tootsie Rolls - not quality chocolate bars) as they get on Halloween. (I know how to get rid of it, though. The first fit they throw or major fight? It's gone as the consequence...and surely that won't be very long. ;-) Then I'll hide it in the top of the pantry, & it will become part of what *we* give out on Halloween. Yeah, I recycle like that! :-P) We do so love parades, though. They are one of our family's favorite occasions!

After the parade, we came home & went swimming in our neighborhood pool. It was surprisingly quiet, which was refreshing, and after we had splashed our hearts out, we went to our new fave local pizzeria (with all-you-can-eat FREE soft breadsticks!!!) for a late lunch. It was just a perfectly fabulous morning. We could not have scheduled anything better down to the minute.

After lunch, I went by myself over to my BFF's house to help her pack up her entire life, so she & her sons (the exact same ages as my children) could move back to England on 4 days notice. Crushing. Heart-wrenching. Just...awful. Just a week ago, we were planning play dates & girl's nights; she planned on her entire foreseeable future being here, in that house. And now they're gone.

I took all the wedding pictures off the walls and packed them away for the boys, so nothing would "happen" to them. As I was wrapping them up, the older son who is 3 days younger than Will came in; he asked if Will was here and then what day he could come over & play. I tried so hard not to cry, knowing they'd be gone in 24 hours. The younger son who is two weeks younger than Sis wanted me to sit with him while his mom went to look for their passports, so she could check them in early online. I asked if he was excited for his big airplane ride the next day? He said yes! (Whew!) ...And then he said, "Daddy doesn't want to live with us anymore." Sweet Lord. I actually felt my innards seize up. God gave me the grace to respond, "Well, that is just the silliest thing I have ever heard!" He agreed & said something else to the same effect. I managed to vocalize, "Well, that is just not a good choice! I'm am so happy you have your mommy, b/c she will always make wonderful choices with you!" He repeated me right as she walked back in the room. She asked, "What did he say?" I replied, "He said his mommy makes the best choices." And we both cried...

I stayed & helped pack until just after 11 PM Saturday night, (came home & snuggled JB as close as I could on the couch before bed,) and then brought my kids over to say goodbye & play while we loaded them up for the airport Sunday morning. 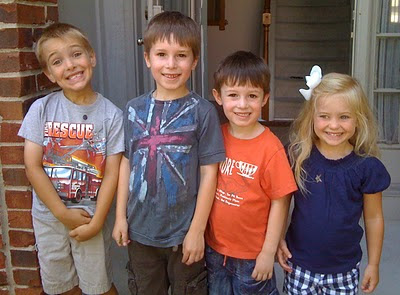 The little ones killed me. Annelise & her son were both born two weeks apart right after we had each moved here. (This was the last time we moved here.) We nursed these babies together while we chatted at our (now also closed) fave Coffee Lounge as the "older" (they weren't quite 2, yet!) boys played at a playgroup there. 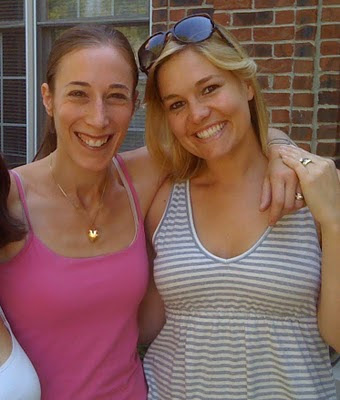 It all feels so surreal... She was my best constant here. (I have another MI BFF who is just as precious to me & whom I've known for over a decade - well before we ever lived here; but she does freelance work, has gone back to school, & is super busy.) This girl was always, always available, even more than I was. She was more excited than anyone in the world that we were moving back last month, and she genuinely loved life here. Even when I mourned for the South, she asked, "You don't just love it here?" :-P B/c she did. I was so looking forward to having them for Thanksgiving, again, this year. (We did the two years we were here last, b/c they're British - they didn't know much about it or have fam here, so it was perfect for them to spend with us!) Not only do I ache for everything that she trusted & loved in her life being ripped to shreds, but I have lost *my* reliable pillar here, too.

After we said goodbye yesterday, the rollercoaster shot back up to the heights. We had a delish lunch with JB to regroup and headed out to his parents' house to spend a little time with them and JB's brother & his fam. Will rocked backyard baseball, and Annelise was *THE CUTEST* when she filled two buckets with the hose, dragged them over to her lounge chair, and plopped her feet in each one: she was "having a pedicure"!!!! (I can't wait to get that pic! :-))

So I had the best & worst holiday weekend ever. I am heartsick, and I'm happy that JB loves us and truly cares. My eyes sting. From crying & from chlorine.
Labels: celebrations friends kids