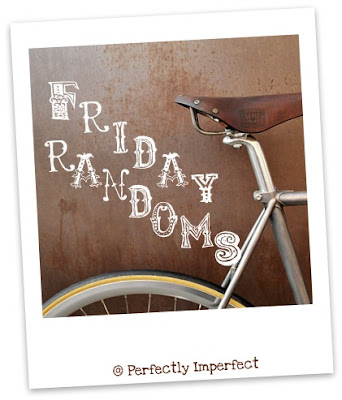 * Will lost his 5th tooth yesterday at school while eating his apple for snack. His sweet teacher even sent home a "Dear Tooth Fairy" note for Will to put under his pillow explaining that he swallowed it. :-D (I never swallowed a baby tooth when I was little. Did y'all?) The tooth fairy came during a Project Runway commercial break. ;-) She took the note and sprinkled blue glitter on the quarters in her (super frugal) wake. [I've heard of kids now getting $5-$20 per tooth. Will gets 50¢. He says his tooth fairy is "very reasonable." :-D]

* I was invited in to observe Annelise in her Montessori Kindergarten for a few minutes first thing today before I went to Zumba:

Here she is doing "movable alphabet" work; she was verbally told this sentence, picked out the letters, and spelled it on her own. I don't think I could do that until 2nd grade! Bursting with pride over here!!! She just blows me away. Will is sooooo good at math, but I agonize over his spelling. It just kind of makes me sigh with some relief that I'm obviously not going to have the same concerns with her. (Not to say we won't have different ones, but...) I just feel so blessed that both of our kids LOVE school and WANT to do well! :-D

* It was actually kind of nice to walk out of Zumba this morning and NOT get hit by a wall of steamy air hotter than I already was. Maybe I am ready for fall? (And by that I mean SOUTH GA FALL - like 70's. *NOT* northern fall with frost & snow suits. :-P) I can't even tell you the joy I have over NOT dreading fall for the first time in 5 years! It can be my favorite season, again. :-)

* Crushed to bits over the surprise closing this week of our favorite local pizzeria. :'( Will actually burst into hysterical tears for about 10 minutes; it was close to the sound he makes when our time is up with LaLa. I am 100% sure that the NASTY new Pizza Hut was the final nail in their coffin. Not that I would ever eat there in the first place, (PH is my least fave pizza on earth!) but I am super boycotting it now. SHOP LOCAL, PEOPLE!!!

* Sleeping with our windows open now is dreamy!

* Ann Voskamp offered this wonderfulness: "The bravest love is wildly faithful and it falls hard again every morning... It’s grace and fresh gratitude that can make us strong enough to marvel in the seeming monotony of anything. And the happily married have eyes that look long enough to make the familiar new." ♥ ♥ ♥
Labels: all about us food kids marriage nail polish