My kids (are forced to?) take after me: we jump into life right away wherever we are! Annelise started her new Montessori last week and absolutely could not be happier! She is bursting with pride over reading. She read Go, Dog. Go! *for real* last week!!!

Will also began his new first grade, and I am so proud of the way he is transitioning. For whatever reason, Annelise's new start seems like no big deal - it's still individualized Montessori, and she wasn't quite as close with the kids in her class. She's also more go-with-the-flow (unless she's upset) than Will is. He is WAY more sensitive & has wrapped so much of his identity up in his "being a First Grader." I was nervous for him - on top of the fact that his new school is light years ahead of the one we just left curriculum-wise; it makes first grade up north seem like Kindergarten. There is a lot to catch up on, and I didn't(don't) want him to get frustrated.

So far, so good! He had his first spelling test Friday, and his sweet new teacher emailed me right afterwards that he did great! (LOOOOVE that communication!!!)

His class (along with 2 others) also gave a big patriotic music program Thursday. Apparently they had been practicing for weeks and had all made these red eagle shirts using their handprints. 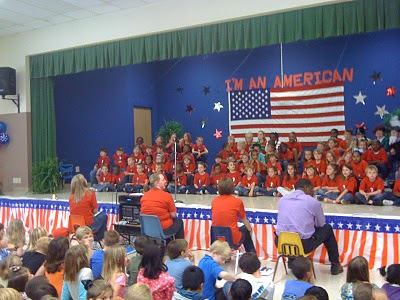 They did everything to include Will equally, even at the last minute - including making his own handprint shirt Wednesday. I was SO IMPRESSED! (And I have honestly never heard a hoard of 1st graders ever sing so clearly & beautifully!) It made my heart want to burst with pride, watching him sing all the words & then seeing how he's already made friends in his class. :-) 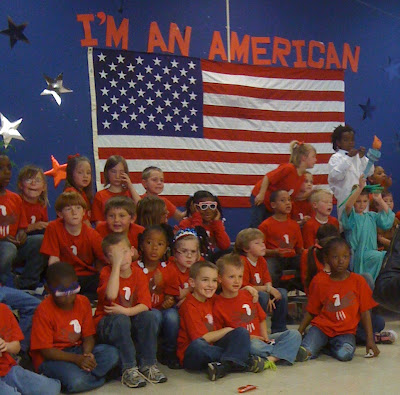 I love the principal, too - at the end of the program, she even gave Will extra props, saying "Up on that stage right now is a boy who just moved & came here 2 days ago, and he did so well to learn the whole program so fast!" Yay!!! Go Will!!!!!
Labels: kids moving