Rewind to Tuesday at noon. Three hours before the car taking us to the airport was scheduled to arrive. The kids had been whining to go outside & play = absolutely not with all the snowpack, even if it WAS above freezing for the first time in 2011 in Michigan. The movers had been working like crazy for 3 days and were trying to finish in time for us to leave. It was lunchtime. I opened the freezer...and saw a coke can had exploded EVERYWHERE. [Thank you, random mover. (Seriously, our movers are THE BEST, but the one new guy they got for extra help Monday forgot he put it in there. *Sigh.*)] That fridge belongs to the house owners & stays in the old house, so I had to clean it. Talk about a mess!!! My hands are still rubbed raw with red freezer burns (genetic sensitive skin!) and it took me about half a (COLD!) hour.

During this time of my preoccupation, my children took it upon themselves to slip outside. By the time I got back to focusing on & dragging them back in, Annelise's cheeks were purple. @#$%&*+?@%$!!!!!!! Of course, the Benadryl was packed. "I TOLD YOU NOT TO GO OUTSIDE!!!!!! I HAVE MY REASONS! THIS IS NOT ABOUT YOU HAVING FUN!" My BFF Tina was coming to say goodbye, so I called to ask if she could bring any antihistamine with. She arrived & saved the day...and then she asked, "Where's Bonnie?"

Our garage & front door were open all day while the movers loaded the entire contents of our house. Bonnie was great staying wherever the kids were, even with the open doors. When *THEY* snuck out while I was buried in the freezing freezer, she thought she could, too. She was gone. Gone. And our car to the airport was coming in TWO HOURS.

Talk about freaking out.

We all screamed & called offering her treats. The movers ran around the house. Tina kept the girls & yelled off the front porch. I got in the car with Will & drove all over the neighborhood with the window down, calling her. I got three neighbors in on the search, too - which made me feel awful; I mean, what a lame way to tell your neighbors goodbye?!?! "Find my dog! We move in less than two hours!!!"

I finally texted JB - not that he could do anything, but to ask if we should take the flight or not, if we couldn't find her by 3 PM - and a neighbor had JUST called his cell phone in Georgia to say she had Bonnie. WHEW!!! We have his cell phone & my email on her collar.

Cut to an hour and a half later: 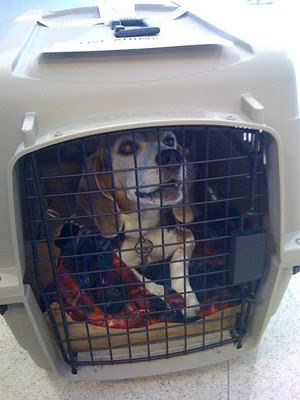 Bad girls who run away go to jail. (Or at least get crated for their first freaky plane ride! HA!) She made it. We made it. We're all safe & sound reunited back in Georgia for good. But, wow. What a way to go out, huh?!?!
Labels: friends kids moving