Sooo, after the Christmas program Saturday, Annelise started coughing a little, and by 5 PM, it had settled into her lungs - like it always does. Same thing always happened to Will, too, every.single.time he got a cold after about the time he turned 3; but his ped put him on Singulair last year preventatively October-March, and he hasn't had another lung-spasm since. (Well yeah, he just had one, but it was b/c we had held off starting the Singulair as long as possible, b/c it is SOOOO $$$$$$, even with insurance.) We've always had Albuterol, b/c of how Will started out, so whenever Sis got the cold-wheezing-lung-crud, I just used his nebulizer on her. No biggie. It worked fine. I am not a take-my-kids-to-the-ped-at-the-drop-of-a-hat mommy. I'm not a hypochondriac, germaphobe, or natural worry wart, I'm not a fan of a copay for them to tell you to push liquids & let it run its course, and I'm not about over-medicating. If something isn't getting better, sure we'll go, but it's never my first response when I'm familiar with what's happening.

She was not doing well over Saturday night to Sunday morning: nebs every 4 hours. I had to sing at church, so Daddy stayed home with the kiddies, and by the time I got back, I think that was her lowest point. The rest of the day, we thought she had turned the corner. Only two more nebs all day! I would have probably even sent her on to school Monday, but we were practically out of Albuterol after the marathon weekend, and she had to appear in person to get a script, so that's actually the only reason we went into the ped Monday morning.

We thought she was fine!

So off to St. Joe's. The cool parts: we had to wait all of 3 minutes, they were so fast & efficient, we had a flat screen in our exam room with Food Network ;-), and I just felt incredibly blessed that we actually have health insurance!!!!! I was also crazy thankful that I had my iPhone to connect with the outside world in there - major, major blessing!!! The bad & sad: I know she was scared that we were there, and it broke my heart. She cried just like I would a couple times when they said we'd be there longer & longer. Getting her IV line was horrific, too, although the nurses did a perfectly quick job; she screamed hysterically like a stabbing victim. When she didn't get all better after 3 hours in the ER, we got admitted. When we got upstairs to our (gorgeous for a hospital!) room, she lost it, again; even though I'd explained several times that we were going to have a sleepover there that night, I think she still somehow thought we were leaving. The fabulous tech, Monique, brought her the biggest teddy bear they have ever had, a Disney princess stationary set, and her choice of princess movies to watch on the huge flat screen in her room. That helped. A lot. ;-)

I have personally never spent the night in the hospital other than when my children were born, and - believe me! - I know how lucky I am for that!!! But it still breaks my heart that my daughter has already had to. At 4. (And again, I know so many of my precious friends have dealt with so much worse, and I am beyond thankful for the health we have enjoyed! But no one can deny that even the tiniest hardship for your kids cuts you to your core.)

She had to stay until she could be weaned off oxygen & keep her pulse ox above 95. They took her off last night around 9 PM, (JB stayed with her, while I came home to get Will, b/c I'd been with her all day while JB was at work, and she wanted Daddy!!! :-D) and she made it through the night! We got discharged this morning: 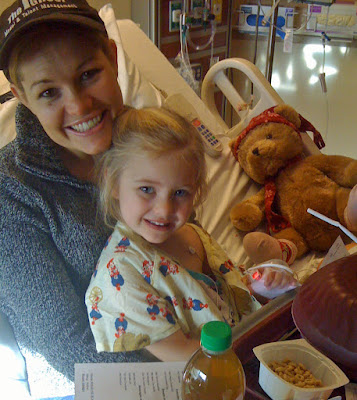 She's fine! We're going back to the ped tomorrow afternoon just to get checked & to talk about preventative meds for her, too; but as long as she feels like it, she's going back to school tomorrow & even to dance/gymnastics. :-)

[And in our defense: this morning, her doctor *did* say she was borderline for admission yesterday, and that had I never brought her in, she probably could have gotten over it with the Albuterol I was dosing; but that since this happens with every cold & since she's always a little congested, it's very good for us to get this managed. I'm good with that. :-)]

THANK EVERYONE who prayed so hard for us and lifted us up & carried me through on FB. I feel so blessed to have that much love coming our way!!!
Labels: all about us kids