The kids had a snow day off school today. Let me go on record saying that snow days are my new personal hell. Just in case anyone thought her snow allergy was a fluke or didn't really believe me, this was her last time playing out in the snow *EVER IN HER LIFE* this morning: 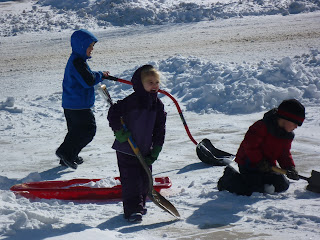 Because when she came in, (even after everyone had been warned not to let the snow touch her skin): 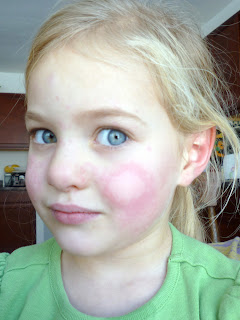 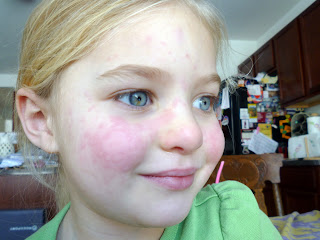 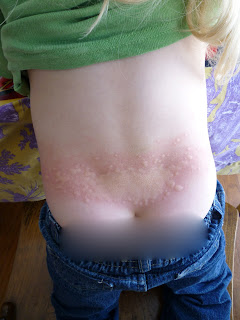 Her back is what got me this time. (Her shirt was damp, so even though I had tucked it in tightly & pulled the bungee cords in her coat, apparently kid play can undo anything.) I wanted to throw up and burst into tears when I saw it. (I want to all over again right now seeing the pic...) My neighbor was here with us and said she would have never believed it, had she not been here to see the entire progression in person. It truly is purely the snow.

I gave her Benadryl this time, and the rash went away MUCH faster. Seeming-proof of a histamine reaction. When I told the doctors in the hospital last week about her previous reaction, they totally brushed it off. One even said, "If she's allergic to snow, she'd be allergic to water." Wow. Thanks for your help & support. Like I'm an idiot. Hello - if people can get heat rash, why couldn't others get a "snow rash"?

I don't believe everything on the internet is true, but I have discovered we're not alone.

While I'm very thankful for further validation, I really just want to bawl my head off. Who could stand to see their child at less than 100%? (Esp. after last week. :'() It breaks my heart that she's not going to be allowed outside anymore to play whenever there's snow. (Just b/c *I* hate it & won't play in it, doesn't mean I want to hold my child back from enjoying it.) I hate feeling even more trapped now by winter weather. This is spiking my snow-freak-out-ness to gargantuan heights. Please pray for us: pray for her to stay healthy & avoid any future reactions, pray for me to be calm & anxiety-free over the snow, and pray for God to deliver us from this situation in whatever way best fits His will!!!
Labels: kids