Houston is the most non-stereotypical "Texan" city in the state: it's a little more Southern, a lot less western. There aren't big country western line dance saloons all over the place (I'm sure there are some, but I've only heard of one & know no one who's actually been :-P); the landscape is so lush & green (nicknamed the Emerald City, b/c of the year-round green) instead of any brown tumbleweed or cactus; it's a true international melting pot (more people from more different countries than anywhere else we've ever lived!) instead of only having a major Mexican influence; and there's a very hip & sophisticated metro culture here.

I have to admit, I was a little disappointed when we showed up here and not everyone wore cowboy boots every single day...but for about one month every year, that totally changes! Super modern, metro chic Houston goes RODEO!!!

[B/c wiki is more succinct that I:] The Houston Livestock Show and Rodeo, also called RodeoHouston or abbreviated HLSR, is the world's largest live entertainment and livestock exhibition. The event is 20 days long. It is kicked off by the Downtown Rodeo Roundup held near Houston City Hall, the Downtown Rodeo parade, and the ConocoPhillips Rodeo Run - a 10k and 5k walk & run and the World's Championship Bar-B-Que Contest. The show features championship rodeo action, livestock competitions, major big-name concerts, a carnival, pig racing, barbecue and the Rodeo Uncorked! International Wine Competition, shopping, sales and livestock auctions. Traditional trail rides, which start in different areas of Texas and end in Houston, precede the Rodeo events. The City of Houston celebrates this event with Go Texan Day, where residents are encouraged to dress in western wear the Friday before the rodeo begins.

The World's Championship Bar-B-Que Contest, also simply known as "The Cookoff," started in 1974 and has consistently drawn massive attendance numbers for the three-day event, drawing a record 264,132 visitors in 2013. It takes place on the southern parking lot of Reliant Stadium, with over 350 teams participating every year, and is generally considered a "Hot Ticket," as most are for members or by invitation only. While the event is open to the general public, those that can get into the tents are generally allowed an unlimited amount of food and beverages.

The actual rodeo events & concerts begin Monday (they do the ropin' & ridin' followed by big-name concerts each night) but this opening weekend, we were lucky enough to be invited to that "Hot Ticket" Cookoff!!! One of JB's assistant football coaches was actually on a barbeque cooking team, so we got the coveted tent invite = SUPER SCORE!!!!! It's kind of like Oktoberfest in Germany: anyone can come to the festival, but if you aren't an exclusive guest, you can't come in the tents where all the beer, food, & music are. And in these tents - once you do get in - everything is FREE! All you can eat: brisket, chicken (so impressed!), pulled pork (always my fave ♥), sausage (venison!), ribs (shhh - I got a full rack sent home with me! WOOHOO!), slaw, potato salad, & banana pudding (resplendent w/ true Nilla® Wafers) and all you can drink. Yep. ALLLLLLL you can drink. :-P I'm not a big drinker anymore, but it really was fun to have an event like this with food, fun, & music!

In our Texas kicks! 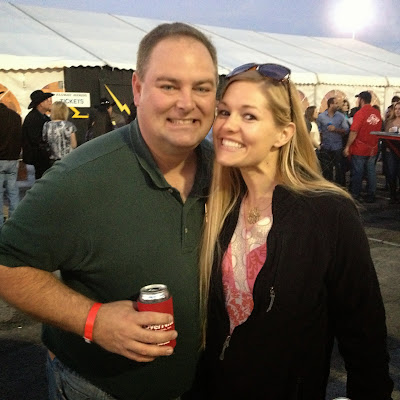 PS - there was a stage w/ a band inside our team's tent; of course y'all know where I landed... ;-)
Since the HLSR lasts three more full weeks, I'm really hoping we can take the kids down one day. (They spent Saturday at their friends' house for a sleepover. :-)) They have a gigantic carnival section that's like a full-on amusement park (I'd rather avoid that :-P), but I'd really be excited to see the cowboy rodeo events. :-) God bless Texas!!!
Labels: all about us celebrations food friends stuff I recommend