Cheer is back in full swing! I have 19 girls (6 new girls + 13 returners) on my squad this year - again, the biggest squad in the whole youth football league. (Average squad size is ~6-8!) We began practices last week, and I was so excited at how my returners blew through our old cheer list. I thought, "This year is going to be CAKE!!!" ...And then the usual suspects started acting up a bit. *sigh* There's ALWAYS that girl who then drags her chatty BFF into not paying attention. And then there's always that other girl who is out in left field (sometimes literally) about 98% of the time. If the squad were 6 or 8 girls, I would try to reign them in...but with 19, it's like herding cats; you really just have to soldier forward. Their parents are standing right there watching (chatting) the whole time, so hopefully, they'll speak to them, if they are disappointed in their behavior/focus. (I know I would w/ Annelise!!!) The 6 new girls are doing surprisingly well, but I'm having a hard time deciding how much time to spend on the old cheers. I don't want the returners to get bored (bored = disruptive!) and I did tell everyone to learn last year's cheers over the last 3 months via our YouTube channel (every single girl has been registered since March)...but I don't want the new girls to feel like they're being left in the dust, either. (I totally see why the one other coach with a big squad wouldn't accept any new girls this year; it's so much easier not to!!! I was too nice. :-P Next year... ;-)) 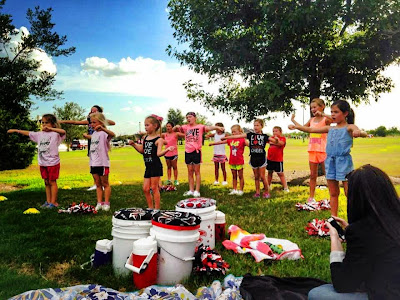 The pressure is a little higher this year, b/c our first game is also two weeks earlier than it was last year (starting next Sat, the 23rd instead of the weekend after Labor Day) - which I LOVE!!! Last year, it felt like we practiced for years before we got to do a game...but this is literally half the time. We did 17 cheers (12 old, 5 new) & started a dance last week, b/t 2 practices & Cheer Camp, so we've got a great start...but we still haven't had a practice with everyone there, yet. (*rant* I get summer vacays, but I can't lie - it does bug me when you KNOW you signed up for a time-intensive activity that begins in August. PLEASE vacay in June & July!!! */rant*)

Cheer Camp was HUGE this last Saturday. I ran the entire thing with the coach of the one other mega-squad. (She's WONDERFUL! We are very much on the same wavelength re: our cheer program = makes it very easy to collaborate!) We had over 200 girls in two sessions (younger girls in the morning, older afternoon.) It was so much fun!!! Exhausting to be "on" for seven hours straight, but quality. :-) 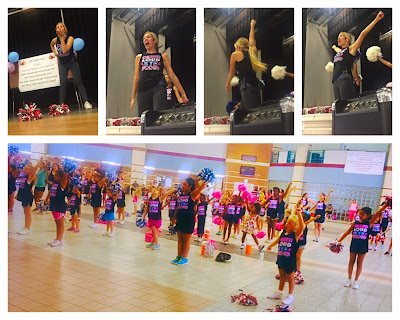 We talked a lot about spiriting: what to say after the cheer that's *NOT* "woo!" Apparently after the 80's, "woo" became 100% taboo. :-D Wooing is strictly forbidden in Jr High & High School cheer, so we want to get the girls out of that habit and have them do what the higher levels do to prep, in case any of them want to try out down the road.

We taught them our new 2014 Hello Cheer (our league does a new Hello Cheer every year that the girls do when they cross the field at halftime for the opposing side), four other new cheers that one of our local Jr High's do, and I taught them all a simple halftime dance I choreographed to Aloe Blacc's "The Man". It had to be easy enough for 4 & 5 year olds, but interesting enough that the 5th graders wouldn't get bored with it:


Cheer Camp took a ton of work & energy...and even though I had to give a couple of my girls *THE* stink eye in the afternoon session for not paying attention, they still looooooooooooove me! :-D (Thank goodness! ;-)) I *am* proud of them - it was a long session & a ton of information. Now, to retain it! 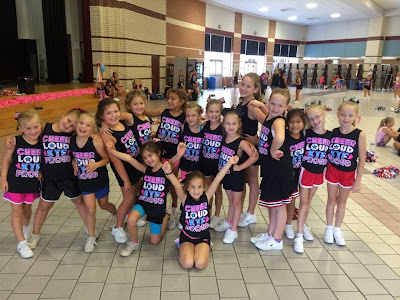 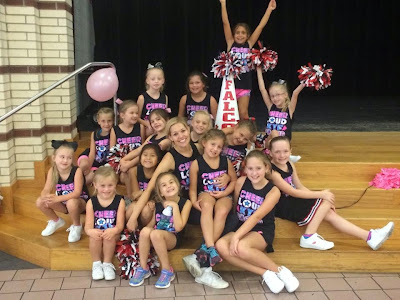 [My girls ♥]
Labels: all about us cheer football friends kids stuff I recommend