Valentine's has never been a big deal to me & JB. We spent our first few dating Valentine's Days apart, (the first one, I was living in Germany & he in Wisconsin!) so that kind of set a precedent for us being low key. I never put expectations on it, but this weekend has been tremendous! Last night we had a date night to see the movie Valentine's Day at our favorite movie theatre that serves dinner & drinks to your seats during the show, which makes it feel even more special. I was trying not to build the movie up too much in my head, b/c usually movies with a bunch of stars rely on the starpower to carry them with no quality script; but this was actually charming! We both really enjoyed it.

This morning, JB gave us all gifts! He gave Will another knight on horseback for his big castle set that he got for Christmas and Sissy a giant stuffed teddy bear, (which cracked me up after seeing the movie last night, b/c he bought it even before we went out!) She is in total love with this bear - it's blonde, almost as tall as she is, and sooo soft! She actually gave him a name right off the bat, too: Peyton Mayonnaise 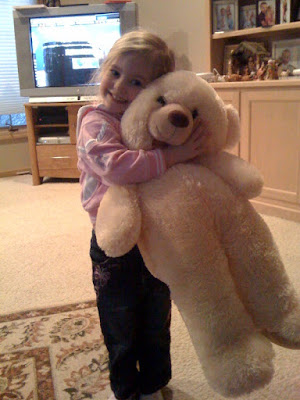 Have you ever heard anything more adorably hysterical???

I received the two most perfect cards, and JB found the last box of my absolute favorite Cella's Chocolate Covered Cherries. (They *must* be Cella's, with the 100% liquid centers - no white stuff in there! I would actually rather have these than Godiva truffles. Seriously.) I got JB two mp3 songs that he's really been wanting and that make him really happy. ("Say Hey (I Love You)" - which makes us smile & want to dance! - and "Hallelujah" - which has been stuck in his head & driving him crazy for over a month. k.d. lang was the last straw Friday night. :-P)

It was just such a happy, fun morning.

I'm also celebrating Chinese New Year today with bubble tea from my FAVE Asian restuarant, which was actually featured nationally in Family Fun magazine this month for it! I was so ecstatic to see the article for Joy Yee!!! (I'm sipping almond milk tea right now. Mmmmmm...)

And finally, not only is it Valentine's & Chinese New Year...but today is the start of the new NASCAR season, the Daytona 500. I grew up in the heart of racing...and absolutely despised it until Will turned our household into fans. I cannot even believe I am typing this out, but I'm actually excited & glad it has started back up. :-P Because the Redskins are my biggest sports passion, and Joe Gibbs (one of the Skins most legendary coaches) owns a race team, we root for all of his drivers: Denny Hamlin, Kyle Busch, & Joey Logano. I think it's ironic that I feel closer to home watching it now, when I never would have been caught dead watching it growing up. :-D (And I especially love having my kids hear the announcers "talk right". ;-))
Labels: all about us bubble tea celebrations food Germany kids movies music stuff I recommend