In the last several months, our beagle Bonnie Blue has started acting like her old puppy self, again. When Will was born, she wanted nothing to do with him (or me) for the first six months. She was a jealous sister and gave us the cold shoulder. Then, *she* was the one who taught him to crawl by barking him forward towards her, :-) 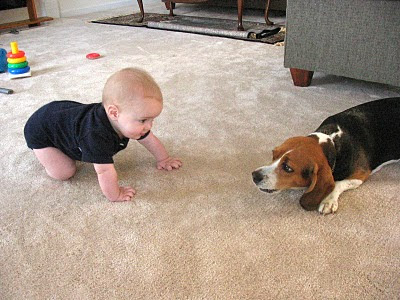 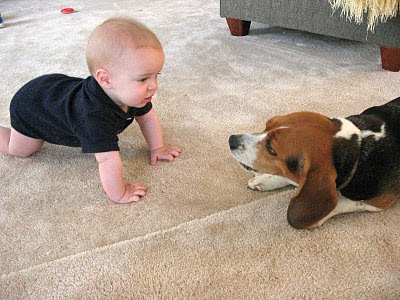 and after that they were fast friends. Less than a year later, though, we moved her out of her almost-an-acre fenced-in paradise of a yard (complete with 4 yellow labs & a golden retriever she could play & run along the fence with next door) and moved to a chilly climate with virtually no yard and no fence for the first year, anyway. Add to that the birth of Annelise the month after we moved and me just not able to give her much attention, except for the negative kind whenever she had an accident in the house, (which hadn't happened since she was a puppy, but with no more fenced-in yard, it was a frustrating reality for both of us.)

She's put up with a lot, (not that we haven't, too, but obviously it's been harder for her to understand,) and the last several months, I finally feel like she's come back around to me. She's choosing to snuggle with me on my lap on the couch, again, like she did as a puppy, and she finally wants to play, again. I think a lot of it has to do with the kids getting older. I know I've blogged about the refreshing feeling this last year of them both finally being old enough not to need me every second, and I think Bonnie has picked up on that, too, and is taking her mommy back. :-)

She's also wanting to play like she used to, especially with her new pheasant toy we gave her for Christmas. We chase with it, play tug with it, and she'll even fetch it! (Well, as much as a beagle will fetch. ;-) She'll bring it back when she wants you to throw it, again, but you have to "fight" her to get it back.) She *does* still treat each child differently, though. She'll play the hardest with me, complete with full out play bark/growling. With Will, she'll play as hard, but she won't chance scaring him with any growling, and with Sis, she'll still play tug, but she won't tug as hard or pounce like she would if I shook her toy in front of her. She'll wait for Sis to hand it to her before she runs. I feel like I've gotten my sweet B back!

I took some pics of her so proud with her pheasant yesterday before we went to the riverwalk: 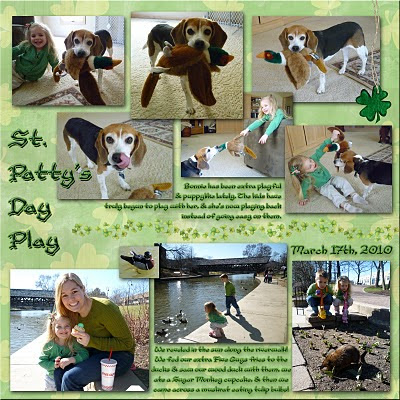 Labels: all about us digital scrapbooking kids