So, yesterday I hosted seven preschoolers (nine, with Will & Annelise) for a chocolate-dipped pretzel playdate. I took a little flak on Facebook, b/c I had just posted on Sunday that I thought I deserved a gold star for letting the kids do a painting craft when I hate messes so much. (I never encourage painting or messy crafts at home EVER, b/c I hate to clean so much, why on earth would I add anything extra to that irritating plate? Plus, that's why we send them to school! School is the best place for nasty stuff like play doh & paint.) But then everyone chimed in, "Chocolate-dipped pretzels with preschoolers?! This from the girl who says she hates messes?!?!"

I'm not a hypocrite - let me explain: food messes are WAAAY different than non-edible messes. If I'm going to have to clean up something, I want to get a sweet dessert out of it! Plus, I honestly just don't enjoy playdates all that much, unless *I'm* trying to make new friends, so I had to make this something I wanted to be around. I teach dance classes of this many 3-5 year olds multiple times a week, so I wasn't worried. I just wanted this to be special enough to get me off the playdate hook for the foreseeable future here! :-P

It was fantastic! Sooo easy and shockingly NOT that messy! The key: disposable tablecloth. I had a space set up for each kid beforehand. They came over, we did the pretzels right away, I helped as needed & demonstrated with my own, they washed their own hands when they were done, and then the girls played in the playroom & the boys played Wii while I wiped everything down and the chocolate firmed up on the pretzels. So simple. The kitchen was spotless before the playdate was over, b/c I scooped all the mess into the middle of the disposable tablecloth & threw it straight into the trash. The only things I had to clean were my two glass dishes that I used to melt the chocolate in the microwave. I bagged & tagged each kid's pretzels, they left, my house was clean, and everyone was satisfied. I was most happy that there wasn't any of that awkward standing around "what do we do now?" feeling. One of my friends thought I was insane to not have all the parents stay, but honestly, I think it's easier w/o them, b/c #1 - kids don't care whether or not you cleaned the house, (although I *DID* :-)) and #2 - the kids entertain themselves. They're old enough not to need a hand on them, so there's nothing for the parents to do but stand around, and then I need to entertain them. I don't mind so much one-on-one or two, but juggling seven parents (who keep looking over their shoulder for their child & with whom I may not have any other connection) is not my favorite way to hang out with adults, you know?

Anyway, it was a rousing success! The only failure was that I couldn't take any pictures, b/c my hands were so messy!!! I only took one right at the end with my phone: 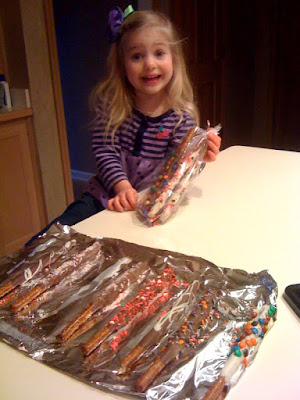 I had envisioned a scrapbook page for the event & everything. Boo. Oh well. (And no, that's not an excuse to do it, again, next week! :-P) I will say, though, it did get me over a little hurdle of avoidance, so YAY!
Labels: food kids