Have no fear - the bus DID arrive safely Tuesday afternoon (albeit 20 minutes late :-P) 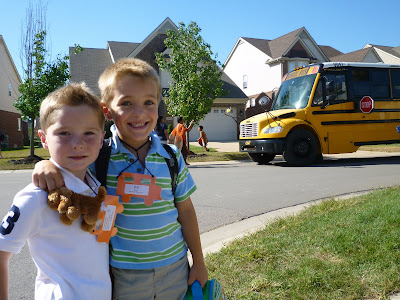 with the correct children aboard and has been perfectly on time (even early yesterday afternoon) ever since. :-)

Will seems to really like school. He's becoming SUCH a "boy", though! When asked what his favorite part of the day was, he replied, "Recess." When asked what else, he replied, "Lunch." (What happened to my little Montessori intellectual?! :-P) I finally asked, "What was your favorite work that you did?" Writing workshop! They write a "3-line story" about whatever they want, and apparently he loves that. He said he wrote one day about the zoo, another about Annelise :-), and I think he'll bring them home Friday. I cannot wait to see what they really look like! On Mondays & Tuesdays they have PE, and on Wednesdays they go to the library, so he was excited to bring home the book he picked out yesterday. Can you guess the topic? Really Wild Life of Snakes: Taipans by Doug Wechsler (He said he also saw a NASCAR book, but he wasn't sure Kyle Busch was in it, so he passed. ;-))

I actually had to WAKE HIM UP for the first time IN HIS LIFE (other than the few times we've had to wake up before dawn for a trip) yesterday morning! He got up on his own today, but yesterday, he was EXHAUSTED. He's got both football and soccer practice tonight, so I bet I'll be waking him up tomorrow, too. (I'm just so glad he doesn't have to be ready for the bus until 8:30. Earlier would stink!)

Sports irritation: yeah, a little perturbed re: practices. Football & soccer both start their 1st games THIS weekend, (football Saturday, soccer Sunday.) Football has been practicing for 2 weeks now = awesome. The first anyone heard from soccer was emailed *last night*. (Not the coaches' fault; the league first met with them night before last.) I don't appreciate that they expect us to drop everything for their schedule at the last minute. Tonight, football is 6-7, soccer is 6:30-7:30. We'll make it work tonight (cutting football short, since it's the first night of soccer, and football is also practicing before their game Saturday, but soccer has no pre-game practice,) but I'm praying God will work out the rest of the practice season for us. (Hopefully more team members on one or the other have conflicts, too!) Will LOVES practice, so I don't want him to get short-changed on anything.

Sissy's activities are going great, though! Last night at cheerleading, I was happily surprised at how much the girls recalled. We gave them 5 cheers last week, and they all really did remember them. We added the famous "Boom, Dynamite" into the mix last night and taught them how to run out into formation. They are the CUTEST! She's also loving her ballet/tap/gymnastics combo class. Not only is her BFF Jocelyn in there with her, but she's also getting really solid instruction which is key.

Her actual first day of school was yesterday, but it really was no big deal. Even though it's technically a new school for her, it's nowhere near the change Will has. We had two open house/parent-stay days there to get acclimated, it's all the exact same Montessori materials she had last year, and it's even the same school Will first went to when we last lived here. It's certainly happy, and she loves going, but it just doesn't seem very dramatic, you know? (That's a GOOD thing, though! ;-)) Montessori has kids ages 3-5 in the same class (so the younger learn from the older) and y'all know how tiny Annelise has always been (barely 10th%), but I cannot.get.over how so many of the kids in her class look like BABIES!!! I'm just not used to her being "the big kid" anywhere! :-P
Labels: dance football kids