WHEW! It's all worked out now: football will start practicing on Saturdays before the games, which leaves Thursdays open for soccer now after tonight. (I *knew* God would work it out!!! THANK YOU, LORD!) Poor Will DID NOT want to leave football early tonight to make it to soccer, though. (Honestly, I didn't either. I hate soccer; football=♥ and I was also having the BEST convo with another parent couple: born & raised in DC, so of course we talked Redskins!!!) We made this soccer commitment, though, so I did my best to talk it up: "Buddy, the running in soccer will make you faster when you run in football!" He stopped fitting, but he was not convinced...until we got there & met the coach. This guy is AWESOME! An army veteran, so super organized, but extremely cheerleader-enthusiastic. He should do motivational training! He's all about learning the game & taking care of business, but with the most pleasant combination of relaxed positivity. Will had us staying after for almost 20 minutes talking; we found out he & his family actually live 2 streets over in our neighborhood, and his son (also on the team) rides Will's bus, so now Will has ANOTHER bus buddy. :-)

During practice, Will tore up that field. I think we had both forgotten a little bit just how *good* he can be at soccer, (if he doesn't get ejected for tackling. ;-) Hysterically enough, football could help with that, since there's no tackling, yet, in flag, either.) He was AWFULLY full of himself, (I actually heard him say, "I am the BEST player!" *trigger sheepish, apologetic Mommy blushing*) but he was just so full of adrenaline with the double-sports night. (And it's not like he didn't back it up! :-P) The last 15 minutes, they scrimmaged the 3rd Grade girls team who practiced beside them. 8 year old girls are way bigger than 6 year old boys, but Will DID.NOT.CARE. My favorite part about the way he plays is no fear. He will run down ANYONE, feeling zero intimidation. Our boys totally lost to the girls 5-2...but guess where the 2 came from? Oh yeah, baby. ;-)

I totally don't mean to make him sound like a lone wolf, (although I did say on the way home, "Buddy, we know you are the best, so let's not say that to other people on our team. Let's say, 'We have the BEST TEAM!'" ;-)) He LOVES his teams! He was freaking out cheering his teammates on when he was waiting to be put back in the scrimmage, and he is all about orchestrating "hands in" at the end of every sports practice: 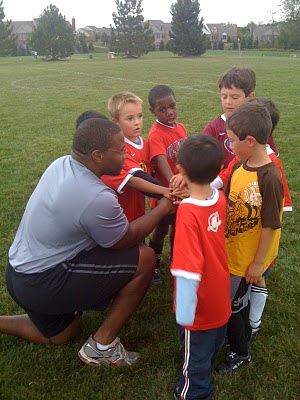 I love his drive and his loyalty.
Labels: football God kids