One of my roommates from senior year at Davidson has moved back to the Davidson area with her family, and since it's less than an hour from my parents' house, we really wanted to get together...for the first time since I graduated over ELEVEN YEARS ago! We've kept up with each other, (we were both floored when her first son, Finn, was born...and looked EXACTLY like Will!) but we just haven't had a chance to see each other in person until today. (For the record, Will & Finn are complete twins, just three years apart. :-P) We got to meet up for lunch at Newk's, where our oldests, youngests, and then the two of us each ordered the same things. :-D It was like no time had passed - aren't those connections THE BEST?! After we ate, we let the kids run around in the puddles, wet grass, & gated area in front of the restaurant for a few minutes...which turned into an hour...after which she said, "I could really go for Starbucks," and I replied, "Look right across the street!" So we relocated the party, got lattes, and [with perhaps questionable judgement ;-)] continued to let the four kids play in the mist on the rain-soaked playground. It was oddly perfect & lovely! What a blessing friends are, even when you aren't together 24/7...or for over a decade...

As soon as we left them, we hopped in the car with my parents and drove to my hometown to visit my Grandmommy, before going to Charlotte Motor Speedway for their Carolina Christmas light show! (The light show part was twice as big as last year, but they didn't have the ice skating.) We were all appropriately mesmerized, especially when we got to drive high up on the banking of turns 3 & 4 on the racetrack - even at under 100 mph, it was thrilling! After Grandmommy & the Speedway, we went to an old family favorite Italian restaurant for dinner - we hadn't been since before the kids were born, and it was heavenly. The owners still remembered us, and Annelise completely charmed them to pieces! ;-)

I found a resolution to my super dramatic, über-important red lipstick crisis! ;-) (I'm not being facetious about the response, though!!! I *loveloveloved* all the advice emails I got! :-D) My makeup guru BFF Jackie pointed me in the right direction shade-wise, and after trying nine more at Ulta, I actually found *it*: 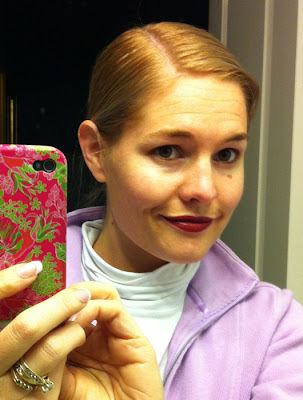 Advent thoughts from Following the Star:

The angel said to her, “Do not be afraid, Mary, for you have found favor with God. And now, you will conceive in your womb and bear a son, and you will name him Jesus. He will be great, and will be called the Son of the Most High, and the Lord God will give to him the throne of his ancestor David. He will reign over the house of Jacob forever, and of his kingdom there will be no end.” ~Luke 1:30-33

Just when Mary’s astonishment over meeting Gabriel calmed down, her heart took another cataclysmic leap. Pregnant?! If Gabriel had the message right, then God’s master plan for Mary was totally out of sync with what she had imagined. The good news was that God’s promise to put an heir on the throne of David would be fulfilled through Mary’s son. The bad news for Mary was that she was going to have to explain this pregnancy to her family. It was no easy road, but God faithfully guided Mary every step of the way; her faith never wavered. If Mary could trust God’s plans, then so can we. Maybe you know what it’s like to feel that a situation is the opposite of what you hoped for, but perhaps is all part of a bigger plan. It’s okay to doubt or be afraid or even a bit angry in that circumstance. Ultimately God asks us to let go of our own agendas and trust that the Master plan is ultimately in our best interests. Trust. That’s all God asks of you. ~Tammy Wiens

God of hope, when I’m feeling sad and wondering why nothing I try turns out like I’d planned, help me to commit my life to your care. Take away my worry and put faith in its place. Teach me to trust the plans you have for my life and to believe that the most important thing of all is walking with you by my side. Amen.

Lord of All, I want to be amazed at the miracle of Christmas, but sometimes the story seems so familiar that the awesomeness of it wears thin. This Christmas, give me a fresh sense of meeting Jesus in the manger. Fill me with wonder and gratitude that Christ came into the world and walks beside me still. Amen.
Labels: Davidson food friends God kids stuff I recommend