Y'all, I just had a stunning revelation: with the exception of one diet vanilla root beer at lunch one mid-September day, I have been coke-free since August! FOUR MONTHS!!! WHAT?!?!?!

I didn't set out to stop drinking coke. [I actually think that would have set me up for complete failure, made me feel deprived, and crave it even more!] I didn't even officially say, "Maybe I'll try to stop drinking it so much." I had stopped buying & keeping it in our home fridge over the last year and only had it when we ate out, (which is often: eating out = my favorite vice!) I did notice, however, after I drank [ahem] several free refills, (you *know* my cheap-self had to get my $$$'s worth!!!) I started to feel not-so-great. I think it's one of those cases where you don't notice when you are being unhealthy in a zillion other ways; but I noticed it started upsetting my stomach about the same time I really shaped up early this year teaching Zumba. I was exercising more than ever, eating healthier than ever, and I think my body just decided to call me out on the coke, while I was at it. (Aren't you impressed with my scientific logic? ;-)) Whatever the case, I noticed that drinking coke was making my stomach hurt, so I thought about backing off a little. At one restaurant meal, I chose water over diet, (but if I'm being honest, it was to save the extra $2, not to be healthy.) And I just never went back...

Oh, yes - except for that one diet vanilla root beer... I fell prey to the allure of a Coca-Cola "Freestyle" - the new coke machines where you can add delish fountain flavor - vanilla, cherry, raspberry, lime, peach, etc. - to any drink they have! (Ohh. Emm. Gee. Where was this machine before this year?!?!) I was told if you add vanilla to the diet root beer, it tastes like a float; so in lieu of dessert, I did. And it did! ...But then it also did give me stomach cramps all evening. So enough of that. :-/

I love coke. (BTW: "coke" = all carbonated soda beverages. If I mean one specific brand, I'll call it out by name. Otherwise, it's all coke. As in: "I used to drink a lot of coke. Caffeine-Free Diet Coke was my favorite. JB likes Fanta Zero. I grew up on Sun-Drop.") I loved the bubbles best of all...but I'm proud of myself for actually listening to my body (what a novel idea! :-P) and making a healthy change instead of more excuses. Will I ever put another one to my lips? Probably. Like I started out saying, proclamations of "I will never do this, again!" set me up for mental failure; plus, I didn't make some vow never to touch it. The fact that I don't want to feel stomach cramps is the bottom line. It's the same reason I also don't drink very much alcohol, anymore. My body says, "No, thank you, ma'am. That party barge sailed about a decade ago." :-D

So what *DO* I drink now? No, not just water. I actually hate plain, clear water. Yeah, I said it. I'll get it occasionally and drink it during Zumba, but it's not my bev of choice. My two faves are
*SoBe Lifewater Zero (oh, yumberry pom!) sweetened with PureVia, which is made from stevia 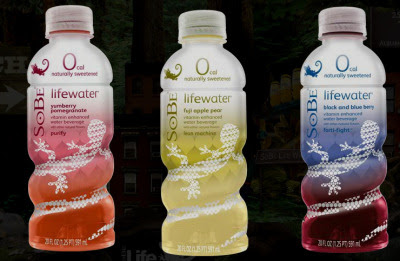 *Kirkland Signature Diet Green Tea from Costco (just like the Lipton, but cheaper = I ♥ Costco! :-))

Is everything I drink calorie-free? :-P I am still a complete Sbux "tall 5-pump or venti 8-pump chai latte with no water, all milk" and bubble tea (almond & taro = faves!) addict. Like multiple-times-a-week addict. But I also try to choose those in lieu of something else. My philosophy is balance & feeling good, when you get to where you want to be. :-) And as much as it floors me to say this, being coke-free feels shockingly good!
Labels: all about us bubble tea food stuff I recommend Zumba