Since the kids & I just polished off our chocolate caramel apples from the Fudge Works, it's perfect timing for our Tweetsie recap from Friday. I've blogged twice before about Tweetsie & why it is so special to us. After having gone so many times, could there possibly be anything new to do?

My best friend & her son rode up with us, so not only did we get a WHOLE DAY of extra girl time, but we also got to share one of our most treasured traditions with them. (BTW - I cannot believe in 20 years of being BFFs, we'd never gone to Tweetsie together! The mountains tons of times, but never Tweetsie!) 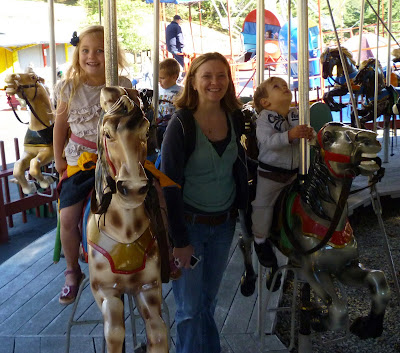 We've both been through a bunch of changes this last year, and this time together - away, relaxed, kid-pleasing - was a MAJOR blessing! I am so thankful we had this time together & with our kids. [Side note: even the ride up was super special - she had found a tape of a Christmas concert we sang together in high school, and amazingly enough, I remembered almost all of my parts! We've got to find someone to convert it to mp3s for us!]

We showed them all of our favorite things, 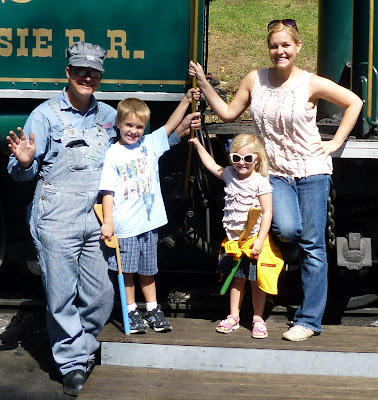 but we also found new ones. I can't ride the Tilt-A-Whirl w/o getting major motion sickness, but we discovered Will & Sis are tall enough to ride it alone, and now it is their new fave: 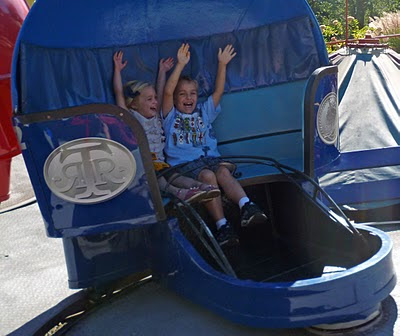 I've also never gotten to ride the Ferris wheel, b/c no one who usually comes with us wants to; but my BFF jumped right on with her under-2-year-old son, so I had no qualms: 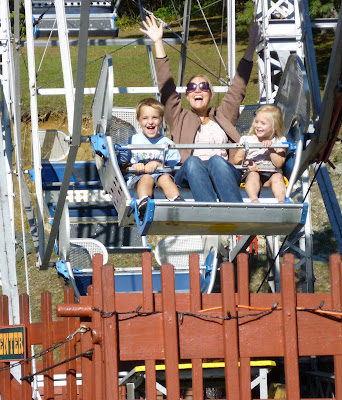 [The other bonus of going with a BFF? Taking pics for each other, so we're actually *IN* our own family photos for once! :-P]

My BFF's mom & niece drove up to the mountains to meet us for dinner when the park closed after 5:30. We went to another super special place for my family: Makoto's - the first Japanese steakhouse I ever experienced when I was little! (Mmmmm, shrimp sauce...) They left for their cabin, and the kids & I went back to Tweetsie on our own when it reopened at 7:30 for our final BRAND NEW (to us) Tweetsie adventure: the Ghost Train Halloween Festival!

Since we got season passes this year, they each included one free admission to the Ghost Train festival, and we were NOT going to pass that up. We didn't know if the kids would be too young, (several things are advertised as best for ages 8 & up,) but our train engineer friend, Scott, was pretty sure they'd be fine; and since we got in "free", I figured it wouldn't matter if it was too scary & we had to leave after 10 minutes. They've been begging to go since last year... 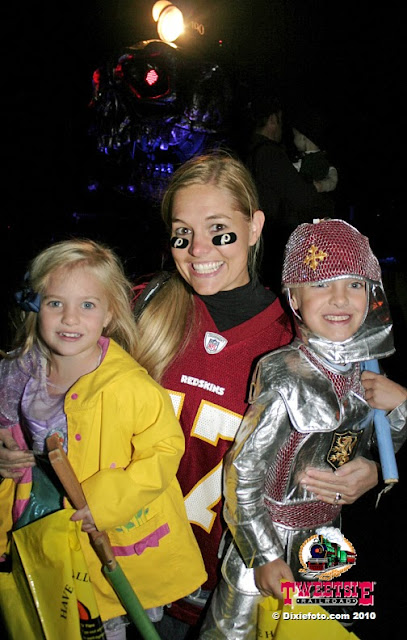 ...and it did NOT disappoint!!! We decided to bite the bullet and ride the train first thing - it was the first ghost train ride of the night and of the whole season, (Friday was opening night,) so it was packed & exciting! Truly, the ride was actually relaxing & beautiful at night! We stopped twice for "scary" stuff that really wasn't (thank goodness) and both kids kept saying over & over, "That wasn't scary!" We disembarked feeling like we had conquered all fear and explored the rest of the park's Halloween makeover. :-) There were 5 trick-or-treating stations set up, which of course were the kids' favorite, and we also rode the Ferris wheel, again, which was gorgeous at night! The sky was full of stars & so clear that you could clearly see the Milky Way.

We found our buddy, Engineer Scott, (with us by the engine 2nd pic from top) and boy, was his make-up amazing! 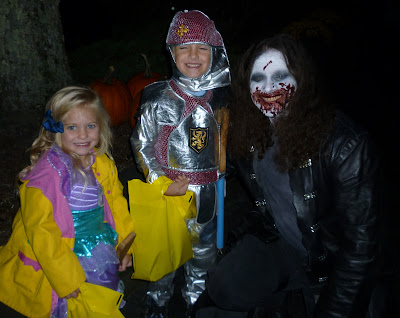 He was the reason the kids weren't the least bit scared: we know who these people are during the day, and they understood that all the players were just the same people we'd seen earlier. :-) We didn't leave until after 10 PM, (Sis finally fell asleep on the last train ride; even the guy trying to be scary when we stopped with a chainsaw & strobe lights didn't wake her! HA!) and we are so glad we got to go! Happy [early] Halloween!
Labels: all about us celebrations food friends kids stuff I recommend