This was Will & Annelise's last Saturday of flag football & cheer. Let's start with Will. His poor team did not win a game all season. Yeah, yeah - I know "winning isn't everything," but this just plain sucked. The boys were not bad; they were given bad plays by a coach that was *SUPER DUPER NICE*...but not quite ready for the head job. Again, I know this is *kids* football; but when every other coach in the league is so hard core, their kids have plays on their wrists & team spirit out the wazoo? "Super nice" alone doesn't really measure up. (Again, did I mention what a super nice, great guy our coach was? He is so nice!!! :-)) But finally, FINALLY yesterday [of course, the last day] our team got together, got some plays down for real, actually completed some pass plays - including one to Will that I got on video!!! :-D - and didn't get stuck with the one awful ref who lost two or three games for us himself with bad, conflicting calls. Will was a tackling machine, with 10+ tackles; he caused two 3-and-out series himself on defense! It was a defensive battle: 0-0 with just a few minutes to go...and our team scored & got our extra point!!! We thought we had it in the bag, until the other team scored on the 2nd to last play. Nooooooooo!

So it came down to last play. If we held them, we won. Will lined up on defense, the ball was snapped...and after the hand off, Will got this kid in his sights. He was NOT going to let this kid score!!! Will took him out, legally launching himself at that kid's flag. Will saved the game and gave our team THE WIN!!!!! You would have thought we'd won the Superbowl, the way we all cheered!!! :-D Will said to me the day before, "If we win the last game, we will win the whole championship!" :-P I was proud that he didn't think they didn't have a chance, and they truly felt like they ended the season as champions. :-) One dad (probably rightfully) said, "They're only going to remember the last game, anyway." :-) 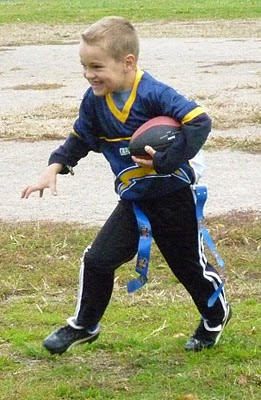 The final icing on the cake? Will got a trophy. The boy is OBSESSED with trophies. This was better than a cash prize. :-P

Annelise then cheered her last game - nowhere near the drama, but lots of fun; and I have to say, I'm really proud of my coaching the squad. :-) It may not seem like a big deal, but it was to Sis & it was to me. :-) 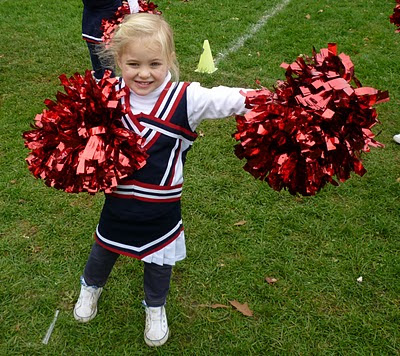 SO PROUD of us! 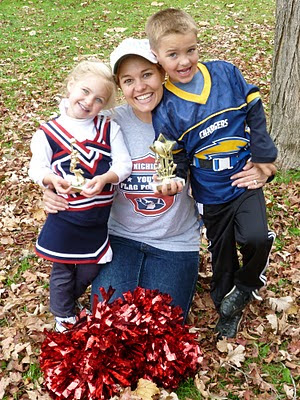 Top off our sportacular weekend with a soccer win today: 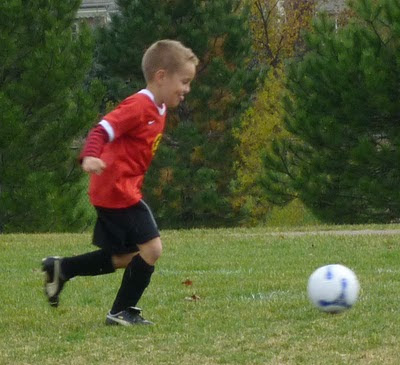 And a Redskins win this afternoon!!! It's a weekend of VICTORY, and I make no apologies that  it. feels. good!!!
Labels: cheer football kids